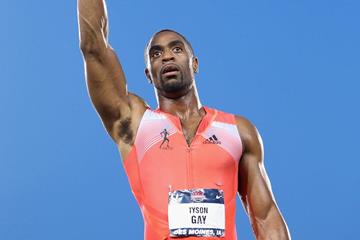 The 2013 IAAF Diamond League meeting in Lausanne can currently boast of 33 medallists from the London 2012 Olympic Games at the 38th edition of the famous Athletissima meeting on 4 July.

“With such a high density of champions, the stadium is once more likely to be on fire during the whole evening,” commented meeting director Jacky Delapierre.

In the men’s 100m, the attention will definitely be on the American sprinter Tyson Gay, who ran the world-leading time of 9.75 at the US Championships last week.

The athletes all competing in this race do all have bests under 10 seconds, apart from Jimmy Vicaut, but the young Frenchman is the reigning indoor European 60m champion and it will be a great opportunity for him to break that barrier.

The 200m will see two very promising talents: the USA’s Isiah Young, who booked his ticket for the IAAF World Championships this summer when he finished second at the US Championships in 19.86 this weekend, and his Jamaican namesake Jason Young, who’s best is exactly the same after he ran the same time last year on Swiss soil in Luzern.

Also in the field is the emerging French talent Pierre-Ambroise Bosse.

The 5000m is also likely to be run at a very fast pace, with the Ethiopian pair of Yenew Alamirew and Hagos Gebrhiwet, the top two in the world this year following their fantastic battle at the IAAF Diamond League in Rome earlier this month.

The 13-second barrier could well be broken for the first time this season in the 110m Hurdles, where the main favourites will be the US trio of Ryan Wilson, David Oliver, and reigning World champion Jason Richardson, as well as Cuba’s Orlando Ortega.

In the 400m Hurdles, London 2012 Olympic Games silver medallist Michael Tinsley is the only man under 48 seconds so far this year and will be the one to watch.

The men’s field events will be just as exciting, with the world’s best in Lausanne as well

To name just a few: Lavillenie, Holzdeppe and Otto in the Pole Vault; Drouin and Kynard in the High Jump; Taylor and Tamgho in the Triple Jump; Majewski, Storl and Whiting in the Shot Put; and Vesely and Tarabin in the Javelin.

In the women’s events, the USA’s Kimberlyn Duncan and Allyson Felix, first and second at the US Championships, as well as Carmelita Jeter will do battle over 200m. Also in this event is the US Championships 100m winner English Gardner, fresh from clocking a superb personal best of 10.85m last Friday.

In the 400m, Botswana’s 2011 World champion Amantle Monstho has dominated the season so far and will come up against 2013 US champion Natasha Hastings and Great Britain’s London 2012 Olympic Games silver medallist Christine Ohuruogu.

Australia’s World and Olympic 100m Hurdles champion Sally Pearson has confirmed her participation after her recent injury worries and will come face-to-face with US hurdler Queen Harrison, second in the US Championships with 12.43.

USA’s Brittney Reese will be the favourite in the Long Jump and Croatian discus thrower Sandra Perkovic, who is unbeaten in the Diamond League this year and leads the Discus Diamond Race, is the top name in her specialist event,.

The meeting will end with a women’s 4x100m Relay, which will be an excellent opportunity for the Swiss team to break the national record of 43.51 against a mixed Jamaica-USA team.