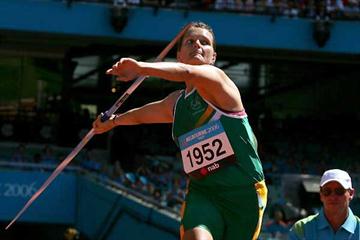 Belgrade, SerbiaTwo finals were contested on the opening day (7) of the 25th World University Games, but the highlight was produced in the qualification rounds with Sunette Vijoen’s African record in the Javelin Throw.

The South African surprised with a throw of 65.43m to shatter the previous continental mark of 63.49M set by her compatriot Justine Robbeson a year ago.

For Vijoen, it was a massive personal best, more than three metres better her previous career best of 62.24m from last year, and also the fourth farthest throw this year.

The Games, which kicked off on 1 July and conclude on the 12th, include almost 10,000 athletes in 15 sports, making it one of the biggest sporting events in the world.

The first day of action on the athletics program, which concludes on Saturday, featured two finals, the men’s Shot Put and the women’s 10,000m.

The 10,000 meter started in heavy rain while a thunderstorm developed not too far from the stadium.  The pace in the first two kilometres was set by Jana Kipchana from Uganda, but after the Japanese Kasumi Nishihara took control, she finished unchallenged to win in 33:14.62. The Russian Tatiana Shutova was the only ahlete in the race with a personnel best performance (33.29.99).

The men’s shot putters also battled the rains.  Russian Sosian Tsyrikhov started his competition with a 19.38m effort, but China’s Zhang Jun took control with a personal best of 19.58m just before the rain began. But despite the rains the Russian improved to 19.59m in the fifth round to take home a one centimetre victory.

World and Olympic Triple Jump champion Nelson Evora of Portugal breezed through qualifying with a 16.57m leap, but the farthest of the day was produced by Cuban Dairon Fuente who reached 16.85.

The fastest time in opening rounds of the men’s 100m came from Egyptian Amr Ibrahim Seoud who clocked a personal best of 10.35. Lina Gincikalte of Lithuania led the women’s opening round in 11.49.

Six finals are scheduled for Wednesday (8), including the men’s 100m, 10,000m and Hammer Throw, and the women’s 100m, Long Jump and Discus Throw. The Decathlon will also get underway, which, along with the Heptathlon, is part of the IAAF Combined Events Challenge 2009.

The athletics events are being held in the Red Star Stadium, with a capacity of 54,000, home stadium for the football club FC Red Star. Serbians refer to the stadium as the “Marakana” as it looks like the famous stadium in Rio de Janeiro.

The Half Marathon and 20Km Race Walk will take place on a course along the Danube River.