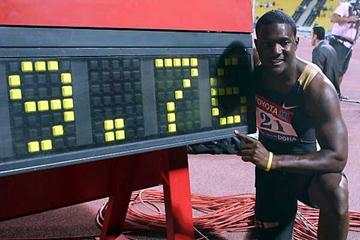 When Justin Gatlin ran a season's opener of 9.95 last weekend in Osaka, Japan with what he said was a good start but a terrible pick-up, we thought we might be in for something special from the World and Olympic 100m champion.

>>UPDATE - the reading of Gatlin's time has been corrected to EQUAL the World record**. Click here for full story<<

But it came sooner than even he expected, as he admitted after breaking the World record** this evening at the Qatar Super Grand Prix leg of the IAAF World Athletics Tour in Doha.

Having failed to win on two previous visits to the Doha Super Grand Prix, Gatlin tore to a track and meet record in the heats, 9.85 (wind 1.1m/s), - to match his own personal best which he closked when winning the Olympic title in 2004 - and set up high anticipation for the final barely an hour later.

With Shawn Crawford (USA) and Francis Obikwelu - the men who beat him in the last 2 years - alongside, Gatlin blasted down the track to stop the clock at 9.77,which was almost as quickly modified (as were all the original times) to 9.76.

Less than a year since Asafa Powell had run 9.77 in Athens, but who then got injured so badly in a face-off with Gatlin that the Jamaican missed the World championships in Helsinki, the world has been waiting for their duels and potential World records.

But no one, least of all Gatlin expected 9.76 so soon. In the event, he felt he could and should have been faster.

"It wasn't my best race, I can go faster," he said breathlessly right afterwards. "If everything had gone right, I feel I could have done 9.73 seconds tonight.”

"I didn't think I was on such good form, it seems strange to have already achieved my season's target.”

"Everyone has been saying you've won World and Olympic golds, when are you gonna break the World record? Well, now I've got it.”

Just about the only person in the stadium not overjoyed was Asafa Powell's manager, Paul Doyle. But that was only a brief jokey interlude. Doyle is as nice a guy as Gatlin and Powell, and he quickly added, "look, it's great for the sport."

And so it is. It seems like we've been waiting a long time for such inspiring news, and in Gatlin's wake the added bonus of an African record came with Nigeria's Olusoji Fasuba's 9.84 run.

Some additional stats regarding Gatlin's WR:

>>UPDATE - the reading of Gatlin's time has been corrected to EQUAL the World record**. Click here for full story<<

Thorkildsen's 90.13, the top of six other world season leads

In a contest of just four throws per athlete, Norway‘s Olympic champion Andreas Thorkildsen threw not only a new world season lead and a meet record but for first time in his career went over 90 metres, new national record. His series: 82.70 - 86.94 -88.80 - 90.13).

In a deep competition of talent, third place was taken by Latvian Eriks Rags (85.79), with a young Finn, Tero Järvenpää throwing a PB of 84.95m in fourth.

Alekna - Only sticking around for Gothenburg

Impressive in its own right was the 69.47m second round release from double World and Olympic Discus Throw champion Vigilijus Alekna (69.47m), which dispensed with Hungary’s impressive Zoltan Kovago (67.46m). Alekna, the IAAF World Ranked number one from Lithuania who is 34-years-old, confirmed that he only 'still staying around' as he has the goal of securing the European title this summer in Gothenburg.

Choge and Kipchoge outsprinted by Songok

The highlight of this meeting in the last two years has been the men's 3000m, and at least on the track it would have been again this year had it not been for the 100m. The race was stacked with talent, and it followed close to the same cast and script as last year.

Eliud Kipchoge, the 2003 World 5000m champion had won on both previous occasions, in a super fast times. And when the pace makers dropped out at 2000m, it was Kipchoge who assumed the lead. But Augustine Choge - who set a World junior record of 7:28.78 in second place last year - and Isaac Songok, second to Kenenisa Bekele in the recent World Cross Country short course race were ready to challenge.

Choge led into the bell, but it was Songok who proved the faster in the final straight, winning in 7:28.97, just outside the meet record, with Choge on 7:29.73, and Kipchoge third in 7:30.47. Tariku Bekele got lost in the last kilometre, dropping eight seconds on the winner, although he was fourth (7:37.07).

Kenyans also took wins in the men’s 800m and 1500m, via respectively Wilfred Bungei (1:44.85), the World Indoor champion, and Alex Kipchirchir (3:34.29), the Commonwealth Games winner. However, despite Bungei triumph in the ‘A’ race he was not the fastest two-lapper of the night, as that honour – and world lead – went to Mohammed Al-Azemi of Kuwait in the ‘B’ race.

The women’s 1500m was taken by Olympic 5000m champion, Meseret Defar of Ethiopia, while the other women’s middle distance, the 3000m Steeplechase, went to east African rivals Kenya via Jeruto Kiptum (9:35.65).

Udmurtova's 7m the best of the jumps

Romania's Marian Oprea carried on where he left off from last year and killed the Triple Jump with a first round effort of 17.29m, though Jadel Gregorio of Brazil rallied valiantly with 17.20m.

Oksana Udmurtova of Russia proved more than the equal of her compatriot Olympic champion Tatyana Lebedeva to win the women’s Long Jump, with 7.02m to 6.97m.

There was a Polish 'one – two' in the Pole Vault with Anna Rogowska victorious on 4.63m, 10 centimetres higher than Joanna Piwowarska.

USA’s Olympic 200m champion Allyson Felix with 22.77 ran and won her opening clocking of this young summer in her specialist event. However, there was an unexpected defeat for World 100m champion Lauryn Williams who was beaten by USA compatriot Stephanie Durst - 11.12 to 11.18 - a personal best for the surprising 24-year-old.

Jamaica’s Delloreen Ennis-London won the women's 100m Hurdles with assurance, as did Bershawn Jackson, the men’s World champion over the one lap barriers, who continued his fine early season form with a 48.65 victory.