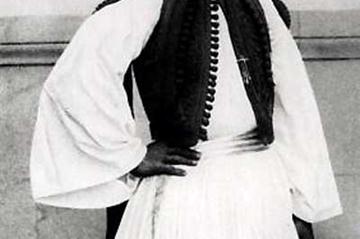 Spiridon Louis’ grandson: "My Granddad was unselfish but obstinate.”

There are many anecdotes about the 1896 Olympic marathon race when Spiridon Louis became a Greek national idol.

This Sunday’s Olympic marathon will be run on a similar and slightly longer course as 108 years ago, starting in Marathon and finishing in the classic Panathinaiko Stadium.

Grandson adds to the legend

In the last few weeks a couple more anecdotes were added to the story of Spiridon Louis.

Today Spiridon Louis lives in Maroussi. It is the same suburb of Athens where is grandfather came from. A statue in Maroussi remembers the sole Greek Olympic Marathon champion.

The grandson never met his famus granddad in person because he was born 16 days after the death of the Olympic Champion. But his father has told him all the stories about the family’s national hero.

“I know that he was an unselfish person with a very strong character. But he was said to be obstinate. Maybe this character helped him win the marathon”, Spiridon Louis said in an interview with Takis Tsafos, the Greek news correspondent of the German news agency dpa.

Louis’ job was to transport fresh water to Athens. So he had a sort of daily endurance training. “He was a simple person and he did not know anything about sport”, his grandson explains and then gives an example:

“After he had won the Marathon his legs were meant to get a massage. But when he was touched he shouted: 'What are you doing? It is a disgrace. Let me out of here, I just want to go back to Maroussi to celebrate with my friends'.”

No wine just orange and cognac

It has often been reported that Spiridon Louis had a glass of wine during his marathon race.

But this anecdote is wrong says the grandson, who was an engineer before he retired. Instead Spiridon Louis said in an interview published in the Vienna paper “Kronen-Zeitung”:  “His girlfriend gave him half an orange and shortly afterwards he got a glass of cognac from his future father in law. There were eye witnesses who have confirmed this a number of times.” That happened less than 10k from the finish.

Spiridon Louis says that there is quite some interest in the story of his grandfather from foreign media in countries like Germany, Japan or the US. But in contrast there is little attention in Greece about his family and the background.

Of course the Olympic Stadium, which is just a couple of miles away from Maroussi, carries the name of the marathon winner. And Louis’ marathon medal kept there.

But when one of his great grandsons carried the Olympic torch two days before the Olympics began in Athens nothing was shown on TV. And Spiridon Louis said that he did not even got an invitation for the Games from the Greek Olympic Committee.

The family has never gained any financial advantages in conjunction with the success of Spiridon Louis. Back in 1896 the marathon winner was granted one wish by the Greek King. But Spiridon Louis did not choose a house or an estate. Instead he opted for a horse and a cart for his business. “We have never made any money out of the story of my grandfather. And I would not like to do so even now.”

No member of the family has ever run a marathon since that Olympic race in 1896. “I had no opportunity to do sports when I was young. I was born during the war. And it was not easy in those times to settle in and build up your living”, confirmed Spiridon Louis.

“But I am fascinated of Athletics and especially of the marathon. If I see such a race I think about the different conditions. In contrast to former times it looks like luxury today.

But I totally respect all marathon runners. If I could I would congratulate everyone personally. I have learnt that it is already an important step to just participate in such a race.”