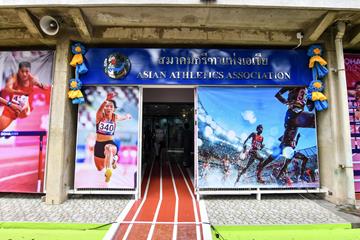 The Asian Athletics Association inaugurated its new headquarters during a ceremony in Bangkok on Monday (15).

Members of the AAA Council and representatives of member federations joined sports dignitaries from Thailand at a ceremony to formally open the new headquarters in Thammasat Stadium, a venue built for the 1998 Asian Games, located on Thammasat University's Rangsit campus near the Thai capital.

Dahlan said the opening was a moment of pride and honour, emphasising that the inauguration of the new AAA office in Thailand was line with the goals which were set for the advancement and development of Asian Athletics.

“On behalf of Government of Thailand, I welcome the establishment of Asian Athletics Association office in the Thammasat Stadium and we at SAT will extend all support to AAA and look forward to work together for the development of athletics," Yodmani said.

"We are also working on legislation which will ease setting up of International sporting organizations in Thailand by offering assistance in setting up offices."

Thailand athletics President Sarutanond expressed his gratitude towards Thammasat University management for all the support given to set up the Secretariat office. "It is our policy to make Thailand the center of sports and by establishing AAA office, Thailand athletics will benefit through various development projects of AAA in Thailand."

As AAA members entered the Rangsit campus and walked towards the stadium, it brought back fond memories for Andrey Abduvaliev, the 1992 Olympic hammer throw champion, who took the Asian Games title in 1998. Abduvaliev now serves as president of the Uzbekistan Athletics Federation and was recently elected vice president of the AAA.

AAA for the IAAF