Already a great champion, Campbell-Brown comes of age as a personality

Four years ago, a shy Jamaican sprinter made her slow, diffident way past the scrums of journalists deep in the bowels of the Olympic Stadium in Athens.

Veronica Campbell had just become the first woman from her small Caribbean nation to win an individual Olympic gold medal in a flat sprint. But the wary 22-year-old seemed rather unprepared, bemused even, about the amount of attention she was attracting.

Ask her a question and she would look at you with a frown, as if to say, ‘Why do you want to know that?’ A one or two-word whisper would follow, the words muffled by a strong Jamaican accent.

It’s something of a cliché to say that a lot changes in four years. Indeed, if you look at the result of the women’s 200m final it seems as if nothing has changed – Veronica Campbell gold, Allyson Felix silver. Same result, different city.

But the Olympic 200m champion of 2008 is a very different person. She’s Veronica Campbell-Brown for a start, having married Omar Brown, the 2006 Commonwealth Games 200m champion in November last year. She’s also faster – as her 21.74 victory in Beijing’s National Stadium on Thursday (21) shows.

For the record it was the fastest 200m by a woman for 10 years and places the Jamaican firmly among the top ten on the World all-time list, a result she says, of being able to train outdoors all year at her new base in Orlando, Florida, of being injury free, and, ironically, of not having run in the 100m first.

“Although I always want to run a double at a championships coming out here I was feeling fresh and good throughout the rounds, so I think in the end it was a blessing I didn’t run the 100m.”

Given that she retained her title, the first woman to do so since German Bärbel Eckert in 1976 and 1980, and that she’s also the reigning World 100m champion, surely Campbell-Brown should now be regarded as one of the greatest women sprinters of all time. “I didn’t think I was going to run that fast,” is all she says.

An example to Jamaican women

But the Campbell-Brown 2008 version is not just faster, she has changed in other respects too. She’s still a quiet, even introverted, personality, but she’s no longer the shy debutant of the team. She was the flag bearer for her country at the Opening Ceremony, for example, and is described by one of the team doctors as a captain of the Jamaican women.

She’s certainly an example to the fast young guns in green and yellow who are making this the most successful Olympic Games in Jamaican history.

“Veronica’s our leader, definitely,” says Kerron Stewart, the 24-year-old who’s won Olympic 100m silver and 200m bronze in her first Games. “She was running when I was in college, so she’s definitely someone I look up to.”

“I think Veronica leads by example and when you have people like that in the camp you know you’re on the right path. The same calm persona that you see on the track, that’s what we get from her. She’s a great athlete and a great person.”

It’s a role Campbell-Brown herself is willing to acknowledge. After a hectic evening that involved winning the Olympic 200m, being interviewed by dozens of TV crews, running anchor for the Jamaican sprint relay team, collecting her gold medal at the ceremony, visiting doping control, and attending a badly behind-schedule press conference, Campbell-Brown eventually stood for a few moments to chat with patient members of the written press.

“Yeah, I’m a bit more experienced than the others,” she says. “I always like to set an example for others around me to follow so, with that said, maybe I could classify myself as a leader.”

“I was the flag bearer and I was recently honoured by my country – an honour of distinction,” she adds with a smile.

I realised that I’ve got to do my part

Indeed, it was partly a sense of team responsibility that helped propel Campbell-Brown to her gold medal. Having watched the remarkable Bolt, and seen her teammates clean sweep the women’s 100m final, Campbell-Brown felt anxious about her place at the Jamaican party.

“I was extremely nervous before this race,” she says. “More than I’ve been before. In Athens I wasn’t Olympic champion so there wasn’t the same pressure. But now as Olympic champion there was pressure to defend my title, and the way Bolt ran and everything that was going in the 100m, I realised that I’ve got to do my part.”

“I felt as the defending champion I had to come out and compete. And with everybody running so fast, I felt I had to get out there and run as hard as I could.”

The final was pitched as another showdown between Campbell-Brown and Felix, the American who has won both World Championship titles since the Jamaican became Olympic champion in Athens. Last year in Osaka Felix was supreme, but Campbell-Brown says she learned from those defeats and knew exactly what to do to win in Beijing.

“I know Allyson is a great competitor,” she says. “But the thing that I know how to do is to get away early and hope that they don’t catch me. That’s what I tried to do. I tried to run the curve as hard as I could because that is my strong part.

“With Allyson over the years, when she beat me I realised that I was coming off the curve too close to her, and then she just pulled away from me. So the main thing for me tonight was to get away from her and the rest of the field and hopefully they wouldn’t catch me by the time of the finish.”

Jamaica - a great tradition in the sprints

Campbell-Brown’s victory confirmed Jamaica’s complete dominance of the sprints in Beijing, leaving the US with no Olympic gold medallists at 100 or 200 for the first time since 1976 (discounting the boycotted Moscow Games of 1980). And with US out of the relays as well, Jamaica looks set to add both 4x100m titles too.

Such results inevitably prompt questions about how a country of 2.7 million people can be so comprehensively outgunning one of 300 million in such headline events. For Campbell-Brown it’s a question of tradition.

“It doesn’t matter that we have a small population,” she says. “What we have had in Jamaica is a great tradition in the sprints – Merlene Ottey, Don Quarrie. I don’t think a lot of people realise how motivated we are by competing and training hard. We just love competing.”

They love the “fun” they’re having too. “As a team we are dominating these Olympics,” says Stewart. “Bolt set it off and after that the Jamaican camp just went crazy.

“We all have confidence that we can go out there and get the job done. That we are dominating like we are is no surprise,” she says. “This is just our time and this Olympics is a special place to show ourselves. This is the Jamaicans’ Olympics.”

On Friday, Jamaica’s sprinters are likely to take centre stage again. No doubt Usain Bolt will be dancing his way to another gold.

But, in her own quiet, measured way, Veronica Campbell-Brown, will leading the way too. After all, she has another title to defend. 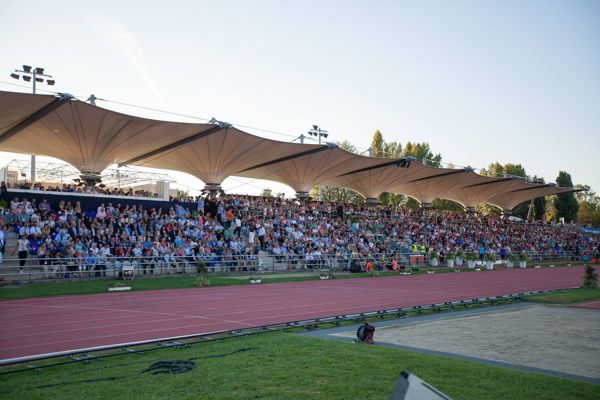