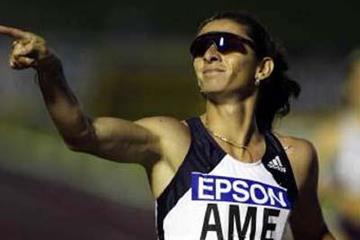 Ana Guevara, the 2003 World 400m champion and one of the most popular athletes in Mexico’s history, will compete at the adidas Track Classic on 20 May, in Carson, Calif., organizers announced.

The meeting which will take place at the Home Depot Center, on the campus of California State University, Dominguez Hills is a NACAC Area permit meeting, one of those Area Meetings in which athletes score qualifying points for IAAF World Athletics Final.

The Mexican national icon, who also owns a silver medal from the 2004 Olympics, has three times been ranked #1 in the world at 400 meters. She is also famous for her phenomenal 28-meeting, three-year winning streak that lasted from August 2001 to July 2004. A last-minute illness forced her to cancel plans to compete in this competition last year.

Also set for the meeting in Juan Luis Barrios, the Mexican national champion at 1500 and 5000 metres. Barrios is known in southern California for winning both the 1500 and 5000 metre races at the 2006 Mt. Sac Relays, and earlier this month he finished second in the Carlsbad 5000.

Barbara Huebner for the IAAF