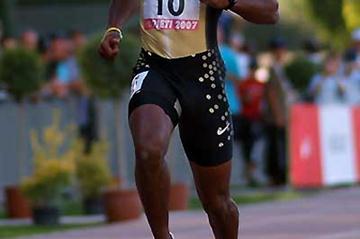 Asafa Powell looking the picture of relaxation in his 100m heat in Rieti in which he set the World record of 9.74 (Lorenzo Sampaolo) © Copyright
09 SEP 2007 General News Rieti, Italy

Asafa Powell of Jamaica running in the second of two heats of the men's 100m at the Rieti Grand Prix meeting - IAAF World Athletics Tour - this afternoon improved his World 100m record with a time of 9.74 seconds (+1.7 m/s wind) *.

Our correspondent in Rieti, Diego Sampaolo commented immediately after the race - "What made Powell's feat more sensational was the fact that he made the time in the heats easing up in the final metres, giving the impression that something very special might also be expected in the final later today."

At the 11th IAAF World Championships in Athletics last month, Powell finished a disappointing third behind American Tyson Gay and Derrick Atkins of the Bahamas.

“Today I proved to the world that Asafa is back,” confirmed Powell. “I ran easily in my heat (9.74 World rec).

“I made some mistakes in Osaka (World Champs) but today I competed as I normally should do.”

“I was nervous in Osaka because I did not compete much this season (before the champs). I forgot how I should have run in the last 40m of a race.

“I will not say today (World record) was a revenge after (the disappointment of) Osaka. There the expectations were too high. I thought too much about the World record, but I have have done a lot of work in the last two weeks (since the Osaka 100m). I learnt again to run from the start and to be more relaxed.”

“If I had had a more favourable tail wind in the final (today, 9.78) I could have run faster. The atmosphere was so special. I have a special relationship with Italy as this is where I am based for training each summer.”

*subject to the usual ratfication procedures