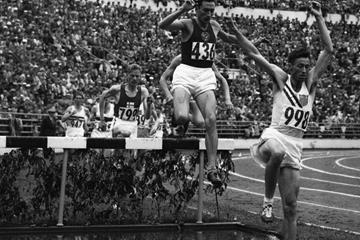 Horace Ashenfelter, the 1952 Olympic champion in the 3000m steeplechase, died on Saturday (6) at a nursing home in West Orange, New Jersey. He was 94.

Born in Phoenixville, Pennsylvania in 1923, Ashenfelter attended Penn State University where he competed on the track team after his discharge from military service following World War II. A two-time NCAA champion over two miles, in 1949 he, along with brothers Bill and Donald, formed three-quarters of the relay squad that set a Penn Relays' record in the four-mile relay.

He remained a competitive national level runner upon graduation in 1949, eventually collecting 17 national titles on the track indoors and outdoor and in cross country, over distances ranging from two miles to 10,000m. But he was still considered a long shot at the 1952 Olympics in Helsinki, where he upset the heavy favourite, Vladimir Kazantsev of the Soviet Union, who lowered his own world record to 8:48.6 six weeks prior to the Games.

Running behind Kazantsev for much of the race, Ashenfelter surged ahead over the final water jump to take a commanding victory in 8:45.4 to smash the Russian's world best. The magnitude of his victory was such that Ashenfelter received the Sullivan Award that year as the country's top amateur athlete.

Ashenfelter was a regular fixture at the Millrose Games in New York in the 1950s, winning the two-mile event at the fabled indoor meeting five times. He won the silver medal in the 5000m at the 1955 Pan-American Games in Mexico City and returned to Olympic action in 1956 in Melbourne, but didn't advance from the heats. He retired from athletics soon thereafter.

Ashenfelter was a long-time resident of Glen Ridge, New Jersey, where an annual road race, the Ashenfelter 8k Classic, is held in his honour on the US Thanksgiving holiday in November.