Ashton Eaton has already won everything in combined events competitions. But there is still plenty to aim at, including a fourth straight world indoor record and a second gold medal at the IAAF World Indoor Championships this weekend in Sopot.

Obviously, having set a record in three consecutive heptathlons is unique enough, but a fourth would be something else. With his third world indoor record coming in Istanbul at the IAAF World Indoor Championships, he will be defending that title in Sopot.

There is certainly a good chance for the record as his performances in individual events this season have shown that the US all-rounder is in good shape following a problematic 2013 season, which still ended with the world title in Moscow despite injury problems.

“My aim is always to treat the crowd, and as far as I heard, the atmosphere here is good,” said Eaton at the pre-championships press conference, adding that he didn’t even remember there was a USD $50,000 bonus on offer for a world indoor record.

The competition in Sopot will be extra special because it will be the first time Eaton will be competing at the same time with his wife, world heptathlon silver medallist Brianne Theisen-Eaton.

“My coach (Harry Marra) will definitely be the most tired tomorrow,” said Eaton. “This is the first time we competed at the same time, at such close proximity. We do practise together and it will increase our performances by making it will feel a bit more like home.”

In Moscow, Eaton faced an early start on the morning following his decathlon victory as he was following his wife’s progress in the heptathlon. But that will be taken to a new level here as he will be cheering for his wife high jumping between his own attempts in the long jump.

There will be no decathlons this summer for Eaton; instead he will try a new event, the 400m hurdles. This temporary switch is made possible by the fact that there are no global championships this summer.

Eaton described running the 400m hurdles in 2014 as a “rest year” in comparison to the decathlon, saying it would get him ready for combined event competitions in 2015 and 2016. “Doing something like 400m Hurdles, it just sounded like fun,” he said. “I like the 400m and I like the hurdles, so that’s why 400m hurdles.”

Having been one of the first to congratulate Frenchman Renaud Lavillenie on his recent world pole vault record on Twitter, Eaton described the pole vaulter as a “real sportsman” following his attempt at the world decathlon pole vault best in Talence last September and finishing the decathlon despite not getting the record.

Eaton then described himself as “one of those people” wanting new challenges, which for him next summer will be the 400m hurdles. 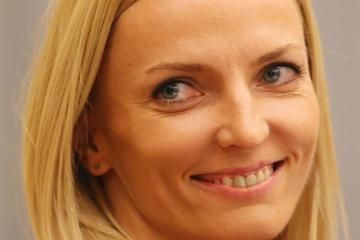 Rogowska won’t feel the pressure in Sopot – I... 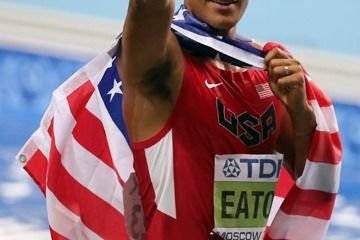