An Asian Junior record in the men’s Shot Put highlighted the second half of the 7th City Games which concluded in Nanchang, China, on Monday (24).

The Games, which began on 20 October, ended on Monday evening in torrential rain. The nice weather that had blessed the Jiangxi Sport Center Stadium during the first four days was long gone on Monday morning with temperature dropped to 17 C with constant rain falling and very strong winds whirling around too.

The event that was affected most was the women’s 400m Hurdles final where some athletes were several seconds below their times from the heats. But despite the weather there was the first and only national junior record of the meet set on Monday evening with 18-year-old Li Meng reaching 20.63m Asian junior record with the 6kg shot.

Li is one of the most promising young shot putters in China in a while having thrown 21.90m with the 5kg shot in 2010 and also placing 5th at the World Junior Championships at the age of 17 in 2010. The Hebei athlete recently placed third at the National Championships in Hefei in September with an 18.55m personal best with the 7.26kg senior implement.

Tian Zhizhong was the second athlete over the 20-metre line with a 20.05m toss for the silver.

The top duo were followed by two youth athletes Feng Bin and Liang Yan. Both finished in the top four in Lille at the World Youth Championships last summer, but here their order was different with Feng, fourth in Lille, claiming the third spot with the first career 5-metre throw of 55.94m and Lille silver medallist Liang Yan, 16, fourth with 54.42m.

Liu Shiying topped the Javelin Throw competition with a 53.11m result in the rain while Xu Huiqin was the expected winner in the Pole Vault with a 4.25m clearance ahead of Reng Mengqian, who set a PB 4.15m.

Three events on Monday were carried out as team events only. Both 20km Race Walks and the women’s 10,000m were apparently used to test a new style of competition.  In the 10,000m Lanzhou grabbed the team victory with the fastest individual runner being 16-year-old Liu Zhuang from the second placed Nanjing team with a 33:28.29 personal best. Liu had placed second in the 5000m earlier.

In difficult conditions in the wind and rain in the morning the best Chinese junior walker Chen Ding lead his Shenzen team to the victory in the 20Km Race Walk. Chen’s result was only 1:26:51 this time, but he had walked a 1:18:52 personal best earlier this season.  In the women’s 20km Race Walk He Qin was the fastest individual athlete in 1:37:42 and also part of the winning Nanjing team. He too has a much faster PB from earlier this season with 1:30:13, illustration how difficult the conditions were for race walking on Monday morning.

On Sunday two 200m runners, who both will be juniors next season, fought hard for the title. Lu Shangbin, who set a 20.74 national youth record last season, lead the runners to the front straight, but Xie Zhenye easily overtook him for an easy looking victory in 20.82, his second best career clocking with Lu also dipping under 21 seconds in 20.97. In the women’s race 100m winner Li Meijuan seemed to be on her way to a double victory, but faded with some 20 metres to go and Zhu Yayun clocked a personal best 24.15 for the title. Li was second with a 24.26 PB.

800m star Teng Haining was surprised in the 1500m race, but the Liaoning athlete representing the city of Dalian took no chances in his primary event to win in 1:50.21. The 18-year-old will still be a junior for next season’s World Junior Championships in Barcelona and with a 1:46.62 national junior record this season and a fast finish could be a player there.

In the women’s race 1500m winner Guan Yue tried to go for a double and did beat her own previous personal best by almost six seconds to 2:01.86, but it wasn’t nearly enough as 16-year-old Lille silver medallist from the World Youth Champs, Wang Chunyu, proved to be stronger emerging as a clear winner in 2:01.34, the leading youth result in the world this year. This is the best result by a Chinese athlete for five and a half years (2:00.33 Liu Qing in Eugene May 2006), best by a Chinese youth athlete for 14 years (1:58.16 Lin Na in Shanghai October 1997) and the best ever result by a 16-year-old Chinese 800m runner all-time, which is a big accomplishment with the Chinese history from the 1993 and 1997 National Games.

There are several young hurdlers following in the footsteps of Liu Xiang. The first four athletes in the 110m Hurldes final here were born in 1993 meaning they will all be juniors for the next season too. There was a surprise in the heats with national high school champion Lu Jialeng lowering his personal best to 13.32 with a smooth, Liu-like hurdling style not hitting any of the hurdles, in the heats. But Wang Dongqiang, a 2009 World Youth Championships finalist and silver medallist at the 2010 Youth Olympic Games in Singapore, took the title in style lowering his personal best to 13.38 in the final. Lu was second in 13.41 and 17-year-old Lei Yiwen also set a PB 13.57 for third place with the pre-race favourite, national junior champion Chu Pengfei left without a medal in the race finishing in fourth place in 13.67. 2012 looks to be a great season for these young hurdlers as they are in places 1-2-3-4 on the world junior list considering athletes born in 1993 and later.

In the Triple Jump, long jump bronze medallist Fu Haitao, 17, added another good personal best 16.56m for the win. This result takes him to the third place on the world junior list and he too is top of the list for 1993 and later born jumpers.

Overall result in the competition was not a big surprise with two Liaoning cities Dalian and Shenyang doing well. This is direct result from the fact that the next National Games will be held in Liaoning Province in 2013 and the home team wants to be in good shape then and obviously the project has had a good start. 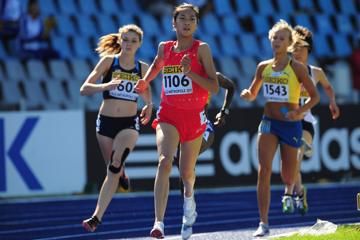