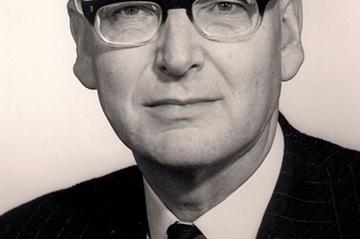 MonteCarloThe IAAF was deeply saddened to receive the news this afternoon from the family of Frederick W. Holder (GBR), an IAAF Honorary Life Vice President since 1984, that he had died on Saturday 21 November 2009. His passing was peaceful.

Born 26 November 1913, he died just 5 days short of his 96th birthday, and this week would have celebrated his 70th wedding anniversary.

“Fred” Holder took over the position of IAAF Honorary Secretary-Treasurer in 1970 succeeding Donald Pain (GBR) who had held the position for 17 years.

At the 1976 Montreal Congress, Holder stood in the election to become IAAF President losing - 96 to 276 votes - to Adriaan Paulen (NED) who succeeded the Marquess of Exeter, who had been in charge of the IAAF for 30 years.

The position of Secretary-Treasurer was split in the same Congress with Holder re-elected Honorary Treasurer and the new Council appointing John Holt (GBR) as General Secretary.  Holder held the position of Treasurer until 1984 when Robert Stinson (GBR) took over the post. In the same year Holder became an IAAF Honorary Life Vice President. In addition he was to become an Honorary Member of European Athletics.

Even after retirement Holder’s passion for our sport would see him, accompanied by his wife Beatrice, a regular visitor to the IAAF Congress and the World Championships, and he remained an enthusiastic follower of our sport throughout his remaining years.

“Today we have sadly learned that we have lost one of the great administrators from our sport's history,” commented IAAF President Lamine Diack. “Frederick Holder, ‘Fred’ as he preferred, helped to safely guide the fortunes of our sport’s international governing body at a time when athletics’ strict borders of amateurism were beginning to be assailed by demands that athletics and its stars should become professional.”

“It was a pivotal moment for our sport, and one mirrored in his own administrative career as the increasing demands made upon elected officials made it essential for the position of Treasurer and Secretary to be separated into two roles.”

“Passionate about every aspect of the diverse sport of athletics, Fred’s contribution to the development of the successful global sport we have today cannot be underestimated, and the same energy that drove his work as Secretary-Treasurer shone through in retirement with Fred remaining close to our sport.”

Born in Brixton in 1913, 96 years ago. His mother was English, but his father was German, owned a china shop in Camberwell, and had changed his name from Ohler to Holder when he became a British subject well before the Great War.

A brilliant scholar. Top of his form at Dulwich College, he matriculated at 16 and was in line for a scholarship to Oxford. Unfortunately, it was the height of the Great Depression, he was the oldest of 6 children and his father had died 5 years earlier.

Economic circumstances led him to join Lloyds Bank. His career was interrupted by the outbreak of War, but not before he had seized the opportunity of marrying the bright and pretty young secretary who had been seconded to his department. The 3 December 2010 would have been their 70th wedding anniversary.

Initially deemed to be in a reserved occupation, he was later drafted into the Pay Corps on account of his poor eyesight. However, when the War Office relaxed its restriction on  glasses, he trained first for heavy ack-ack, then for the infantry. He was commissioned into his chosen regiment, the Queens and fought with honour in the front line, being wounded twice.

After the war, he returned to the bank, this time to Head Office in the City, to specialise in investments, and rose to become the bank’s Chief Investment Manager.

A founder member of the Society of Investment Analysts, he later incorporated from scratch the bank’s first insurance company and launched the bank’s first unit trusts, in the face of much scepticism from general management. Thus he can be viewed as the pioneer of what came to be known as Bancassurance.

In 1975 he retired early, at great financial cost, in order to concentrate on what had become his great passion, the administration of international athletics.

He was only an average club athlete, running for South London Harriers and captaining the bank’s cross-country team. When a slipped disc stopped him competing, he qualified as a middle distance coach. He also became involved in administration, and as Chairman of the bank’s club, helped to organise events at the White City stadium. After acting as Announcer at one meeting in tandem with Norris McWhirter, he was invited to perform the same duty at several international meetings.

In 1960 he was approached by Lord Exeter, the President of the IAAF, the international governing body, as he wished to groom a natural successor to the Honorary Secretary/Treasurer whose health was suspect. In due course he was he was elected to the IAAF governing Council, and a few years later was even nominated for the Presidency in 1976.

Reluctant to accept the nomination at that time, as he believed Adriaan Paulen to be an excellent candidate and worthy of the honour, he was eventually persuaded to stand, but did not campaign, and certainly did not expect to get anything like the 26% of the votes he received.

Post election, Paulen and Holder made a good team, and worked hard together on a number of new initiatives such as the World Cup, the World Championships and the Golden Series of events.

With regard to the splitting of his roles as Secretary-Treasurer in 1976, Holder had long realised that if the Federation was to expand it was vital to have a paid Secretary to administer the organisation's affairs on a day-to-day basis. He had therefore sought Council's permission to hire a full-time administrator, and it was he who advertised for, interviewed and appointed John Holt as Secretary.

Holder was also responsible for the removal of the IAAF from a small two room office in Victoria House near Victoria Station in the centre of London, to larger premises in Putney, south west london. Subsequently, the IAAF moved back to London's West End in fashionable Knightsbridge at 3 Hans Crescent, opposite Harrods.

Holder's duties took him all over the world. He attended 10 Olympic Games, and was deeply involved in organising 5 of them as a technical delegate. He served on Juries of Appeal, and presented many gold medals.

Instrumental in setting up several regional bodies, he and Pierre Dasriaux were tasked with drafting the first constitution of the European Association in 1969/70, and in 1973 he helped to set up the Asian Association and assisted with the organisation of the first AAAA Championships. Indeed, as a mark of appreciation, he was invited back to Manila in 1993 as a guest of honour at the 20th anniversary Championships.

Even as late as 2001, he had a minor influence on constitutional matters, since it was originally proposed that the name of the IAAF be changed to the International Association of Athletic Federations. After a letter from Holder which presented a cogent argument for the addition of an 's' to athletic, an amendment was adopted.

As well as possessing an incisive mind, he was utterly trustworthy, scrupulously fair and extremely kind. Such qualities endeared him to people of all nations and ensured that he made many friends.

Until the age of 90 he continued to travel, both to meetings and on cruises with his wife, and could still polish off the Telegraph cryptic crossword soon after breakfast, even when he had started to lose his memory. For the last two years they were both resident at a local nursing home.

Happily, he enjoyed excellent health for most of his life, although a chronic heart problem necessitated a valve replacement and pacemaker when he was nearly 85. He remained cheerful and in good humour right until the end when he died peacefully after contracting a chest infection.

We offer our sincerest thanks to Fred's son John Holder for the additional information and his reminiscences which have contributed substantially to this tribute to his father.