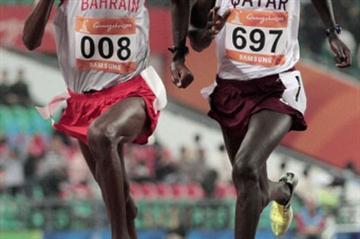 Bilisuma Shugi Gelassa, a 21-year-old Bahraini of Ethiopian origin set a Games’ record in the process of winning the men’s 10,000 metres gold in the Asian Games here on Friday (26).

It was an exhilarating contest in which Gelassa, trailing by about 60 metres from Qatari Essa Ismal Rashed made up considerable ground through the last three laps before winning in a personal best 27:32.72.

There was a great contest in the finishing straight when Rashed tried to inch his way past the young Bahraini who managed to hold onto his slender lead. Even as he neared the finish, almost stumbling, unable to control his body, Gelass started raising his finger to signal his triumph and found that Rashed was almost catching up.

It was touch and go in the end for Gelassa who took third place at the West Asian championships at Aleppo, Syria, last September, behind team-mate Mahboob Ali Hasan and Qatari Felix Kibore. His timing was also the best in Asia for the season.

Hasan, favoured add the 10,000m to 5000 metres gold which he had won earlier, could not reproduce his usual form. The Qataris, Rashed and James Kwalia Kurui had set such a hot pace at the start that only Gelassa managed to hang on.

“I should have got the gold,” said Rashed in the end. “I felt very painful in my stomach. I tried to push myself but didn’t manage to make it,” he said of his inability to catch up with his rival after surrendering such comfortable lead.

Hasan who had set the previous Games record of 27:58.88 in Doha, in 2006, said that he wanted to win the gold but was too tired. “Four days is not enough for me to recover,” he said of going for the double after his 5000m victory last Sunday. “The race was very hard,” he said. Hasan had won the double at the last Asian championships here last year.

Belete makes it two for Bahrain

The final day of track action saw, Mimi Belete adding another gold to Bahrain’s tally, by winning the women’s 5000 metres, and Thailand scoring a thrilling, upset victory in the women’s 4x100m relay over Japan and China. The other relays were won by India (women's 4x400), China (4x100) and Saudi Arabia (4x400).

On the infield, Sevtlana Radzivil of Uzbekistan scaled a new personal best of 1.95 metres in High Jump, Asian record holder Li Yanxi nailed the gold in an exciting Triple Jump contest with a fifth round jump of 16.94m, while Yukifumi Murakami, World championships bronze medallist in 2009, had a personal best 83.15m for the Javelin Throw gold.

Asian season best in the Shot

Sultan Abdulmajeed Al-Habshi of Saudi Arabia reached an Asian-season-leading and Games’ record mark of 20.52m in Shot Put. Al-Habshi went ahead only in the fifth round with Zhang Jun of China having led till then in the Shot Put contest. The Saudi Arabian who holds the Asian record, put 19.80m in the fifth and then came up with 20.57 on his last.

Asian champion Om Prakash Singh of India had to be content with a fourth place, with only 19.17, while another Indian, Saurabh Vij, who led the Asian lists for the season with his 20.65, was sixth with 18.98.

“I am very happy to get the gold and I have also created my season’s best and Asian Games record. I want to be the World champion next time,” said Al-Habshi.

The previous record of 20.42 stood in the name of Mubarak Al-Hebshi, also of Saudi Arabia, who won with that mark in the Doha Games in 2006.

China topped the athletics medals table with 12 gold medals while India and Bahrain had five each, displacing Japan, which was second at the Asian championships . China had won 15 gold medals in the continental meet at the very same stadium last year.

By an IAAF Correspondent