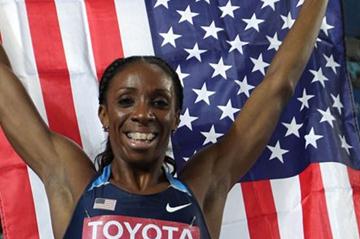 There was a time when going off to practice was the easy part of Lashinda Demus's day. She was not just balancing being a mother and a professional athlete, she was doing it the hard way - with twins.

"I tell you, it was way more difficult than running these 400[-metre] hurdles," Demus said after winning her first World gold medal on Thursday night at the IAAF World Championships.

Demus, who gave birth to twins Duane and Donte four years ago, will bring home what they will regard as a shiny golden toy after twice winning silver ones, in 2005 and 2009.

Demus's gold medal comes with a bonus - her time of 52.47 broke the American record of 52.61 set in 1995 by Kim Batten, and vaulted her from fifth to third on the all-time list.

Batten had set the record when she became the last American to capture the gold medal at the IAAF worlds in Goteborg.

"To get the American record is a blessing," the 28-year-old Demus said.

Demus is quick to acknowledge she would never have made it to the top without being blessed with a family that has supported her both as an athlete and a mother.

Demus is coached by her mother Yolanda, a former 400m runner, and managed by husband Jamel Mayrant. Her father is just one of a number of relatives who help with baby-sitting duties at home in Palmdale, Calif.

"I feel like I kind of ran for my mother, my twins, my husband, my father, because these are the people that support me so much," she said.

"My mom used to run, she stopped early, never got to finish what she started and I feel like I'm living that legacy for her."

Demus said the twins are being watched by her father at her grandmother's house. But she's sure he got to share in the thrill of victory.

"He told me he wouldn't be able to sleep and it's about 5 o'clock in the morning in L.A. right now so I know he's up and he's seen every bit of it."

Demus's mother began shaping her career at an early age, coaching her on a youth track club. When talk of Lashinda as a child comes up, coach becomes more of a mom, proudly proclaiming how her daughter set a national age group record when she was nine that still stands today. And don't forget the fact that she ran a 2:18 in the 800m as an 11-year-old.

Introduced to the hurdles at age eight, she starred at Inglewood High School in Long Beach, Calif., where she set the national record in the 300m Hurdles (39.00) and 4x400m Relay.

She made natural progress on the world stage, from a World junior gold medal and World junior record in 2002 to the silver medal at the 2005 World championships in Helsinki.

Then came the life-changing decision to have a baby. The twins arrived in June 2007 and within a month, Demus was back in training. It did not go that smoothly.

"I started at four weeks, but I was supposed to take off six weeks," she said. "I didn't tell the doctor. I started a little too early and I think my body told me I was in a little pain. So a month after pregnancy I started back up--very slowly."

But being a full-time athlete and mother proved too challenging and Demus left her training ground and coach in South Carolina, where she went to college, and moved in with her parents, forming the team that would pay off in gold (and some diamonds from a meet in Lucerne, she said).

At first, it wasn't easy.

"I used to leave home waiting to go to practice because it was way easier to run than to watch [the twins]," she said. "So that was my little break for the day. They're getting older so it's getting a little bit easier, so I'm excited."

After missing out on the 2008 Beijing Olympics by placing fourth at the U.S. championships, Demus came back and won a second World silver in 2009 in Berlin, losing to Walker after stuttering at the last hurdle.

Demus's training heading to Daegu was geared toward not making the same mistake.

"I focused on my hurdling because I know that this is what usually takes me out of the race at the majority of championships," she said. "I was really focused on steps and technique coming home and making sure I had something at the last hurdle to come home with."

As with babies, she's doing them two at a time.