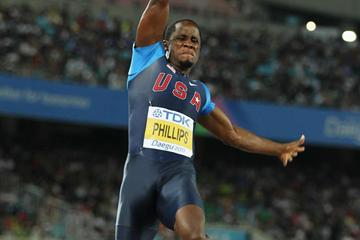 In Dwight Phillips' case, the writing wasn't so much on the wall as on his back.

In whatever twist of fate that determines such things, Phillips was assigned the number "1111" at the IAAF World Championships.

As in four first-place finishes, which is what the 33-year-old American now has in the men's Long Jump, a feat that firmly lands him a place among the event's all-time greats.

"I think it's divine intervention; it was meant for me," Phillips said after turning an injury-plagued season into a championship one by winning the gold medal on Friday night.

"When I got the start number, I saw Allen Johnson and I was like, 'Look at this, what does this mean?' And he told me, 'You're going to win you're fourth world championship.'"

Phillips fulfilled the prophecy by leaping 8.45m on his second attempt, which stood up against a languid assault from world leader Mitchell Watt of Australia and Zimbabwe's Ngonidzashe Makusha, who would win the silver and bronze medals, respectively.

By joining Cuban Ivan Pedroso as a four-time gold medalist, Phillips also equaled the total won by Johnson, who compiled his in the 110m Hurdles between 1995 and 2003.

"I'm just so happy to follow in the footsteps of a great athlete I admire the most, Allen Johnson," Phillips said.

Phillips did some other footstep-following on the pleasant, windless Korean night.

"I am so happy that I was able to represent my family and my country well, and carry on the great tradition in the Long Jump and follow in the footsteps of Carl Lewis, Ralph Boston, Bob Beamon - I'm just happy to be [mentioned] in the same breath as those guys."

While there was little need to hold his breath over the outcome Friday, Phillips said he was prepared for the challenge if anyone had managed to pass him.

"I thought that Mitchell or Makusha could go further. But I had so much more energy inside of me that if they jumped further, I was ready to respond."

In the end, he didn't need it. He passed on his fifth attempt, then, with the gold already decided, he closed the proceedings with a unique gesture.

Running through the pit without a jump, he leaped onto the pit-smoother at the back end. In one motion, he ripped off his number and held it up triumphantly to the crowd.

"I wanted to jump, but I knew that I had already won," he said. "I just wanted to show off a little bit." He then acknowledged, "It was kind of staged."

Staged or not, it was a well-deserved celebration given the adversity he had overcome to make it to Daegu.

After winning 10 of 13 meets in 2010, Phillips came into the championship year with high hopes, only to see them sink like feet in the sand due to a spate of injuries. There was a calf problem in early May. Then a left Achilles injury later in the month that prevented him from training or competing in June and three weeks in July.

"But I was able to train for the whole month of August," said Phillips, who, as defending World champion, used a wild card to get into Daegu without having to compete at the U.S. trials.

"I knew that if I was blessed with four or five weeks of being healthy, that I could win the World championship."

Phillips said that few outside of his coach, Rana Reider; his family, which includes his wife Valerie and 5-year-old son Dwight Jr.; and himself gave him much of a chance. But he believed the outcome would be decided on more than physical preparation.

"I have a very optimistic attitude," Phillips said after the qualifying round, in which he jumped a season best 8.32m. "Sometimes you just think, 'Hey, I've had a lot of great years.' The timing this year is just bad. But I am a fighter, and I'm just having fun. I love to compete."

Having made it over those obstacles gave added meaning to this title, he said.

"This one here has to rank right up there at the top," said Phillips, who won the gold at the 2004 Athens Olympics but failed to make the team for Beijing in 2008.

"I didn't know coming in here. I had a lot of self-doubt. But every time I had an inch of self-doubt, I had really positive people around me to encourage me and tell me, 'You can do it.' I'm just grateful that I have those people in my life."

He made his first Olympic appearance in Sydney in 2000, placing eighth, then won his first World gold in 2003, edging James Beckford by four centimeters. He later won World titles in 2005 and 2009.

He added the Olympic gold to his collection in 2004 in Athens, where his qualifying jump was a precursor of things to come in Daegu.

"Yesterday in the qualification round, I knew that was going to be an indication of what tonight would be," he said. "I think when I won the Olympics my jump was 8.32 and yesterday it was 8.32. I was like, this is a great day for me. It's deja vu all over again."

Actually, he jumped 8.31 in qualifying in Beijing. But apparently fate isn't that picky.

Phillips was intrigued by a question about whether he would have liked to have competed against the legends in the event.

"That would have been amazing," he said. "Every era has their own athlete, and this era belongs to Dwight Phillips."

For now, his number is still far from being up.