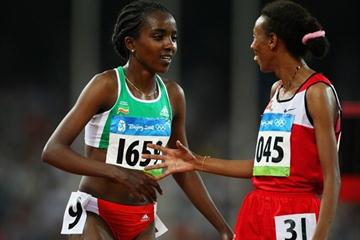 Ethiopia's Tirunesh Dibaba ran the second-fastest 10,000m ever for women en route to winning the gold medal in the first track event of the Beijing Olympics, set an Olympic Record of 29:54.66, and became only the second woman to ever dip under 30:00 for 10,000m.

Dibaba dogged the steps of Elvan Abeylegesse of Turkey through the late stages of Friday evening's race (15 August), just as she did when the pair took gold and silver at the World Championships in Osaka in 2007. This year, though, they had Lornah Kiplagat (NED) to thank for a swift early pace, and despite dire predictions, excellent weather, cooler and less humid than Osaka. (Officials reported 26 degrees centigrade and 53% relative humidity.) Abeylegesse took the pace from Kiplagat between 6,000m and 7,000m and whittled the pack, ten when she took over, down to seven, then four, then two, herself and Dibaba. Knowing the sting of Dibaba's kick, Abeylegesse poured on the pace, trying to run it out of her, but with 300m remaining Dibaba was not to be denied. She moved to the front and by the 200m mark had managed to open a small gap which grew, finally, as they reached the homestretch.

Dibaba won the only significant global title she hasn't won since Athens, and behind her Abeylegesse, in 29:56.34, became the third-fastest ever, set a European record, and won Olympic silver. Wang's world mark of 29:31.78, thought untouchable for fifteen years now, appears at least within Dibaba's reach.

Behind the pair, American Shalane Flanagan was working her way through the wreckage left behind. Flanagan was dropped from the pack along with Kiplagat but passed Kiplagat and set out in pursuit of two Kenyans, Lucy Wangui and Linet Masai, in the closing laps. First Wangui (who finished 7th in 30:39.96) and then Masai were passed by Flanagan, who went on to break her own American record with a 30:22.22 and match Lynn Jennings' 1992 bronze medal as the best-ever American finish in the women's event. Flanagan is the first American to win an Olympic medal of any color in a track event longer than 400m since Jennings, and her place echoed the medal won by teammate Kara Goucher in Osaka. (Goucher finished 10th in a PB 30:55.16.)

Fourth came Masai, in a 30:26.50 clocking which would be a new World Junior Record (pending ratification) and a new Kenyan record. Five more athletes ran their best-ever times.

The honor of the first medal of the Olympic athletics, however, went to Tomasz Majewski of Poland, who took the lead in the men's Shot Put with a titan 21.21m release in the third round which would've been enough to win, and backed it up with a 21.51m improvement in the fourth round. That was more than enough for the win, as silver went to Christian Cantwell's last-round throw of 21.09m, and bronze to Andrei Mikhnevich, whose 21.05m mark was the leader when he put it in the second round--taking over the lead from Majewski, as it happened.

Majewski, unfazed by the presence of World Champion Reese Hoffa and World Indoor Champion Christian Cantwell, produced his winning toss in the same round that Athens silver medalist Adam Nelson fouled for the third time, thereby not recording a legal mark for the competition. Nelson kept his foot in the ring on his first two fouls but threw outside the left edge of the sector and foot fouled the final effort. Hoffa also disappointed, managing only 20.53 with three fouls and finishing seventh. Dylan Armstrong of Canada, in medal position until Cantwell displaced him in the final round, had a 21.04m put in the second round which not only had him close to the medals but should stand as a Canadian national record.

The third final which started today will be finished tomorrow: the first four events of the heptathlon were contested starting Friday morning with the 100m hurdles. Hyleas Fountain led with a 12.78, good for 1158 points, and expanded that lead with a 1.89m clearance in the high jump which put her in first by 50 points. After a lackluster shot put, where Fountain only reached 13.36m, 264 fewer than Nataliia Dobrynska of Ukraine and her 17.29, Fountain slipped to second, but returned to the top with the fastest 200m of the field, 23.21. After four events, then, Fountain won three of them, and ended the first day with 4060 points, 64 ahead of Dobrynska. Third was to Kelly Sotherton with 3938, her 23.39 200m moving her ahead of Russia's Anna Bogdanova (3922). Fountain will try to defend that lead and become the first American heptathlon champion since Jackie Joyner-Kersee.

The men's 100m ran its first two rounds Friday, and World Record holder Usain Bolt was no surprise as the fastest of the two rounds. His 9.92 looked easy for him, and most observers are putting their faith in Bolt to take gold on Saturday--provided there's no dramatic returns to top form by Tyson Gay and Asafa Powell, both of whom advanced, Powell perhaps more easily than Gay.

Pamela Jelimo, the revelation of the women's 800m this season, advanced in that event easily with a relaxed 2:03.18; the fastest times were provided by World Champion Janeth Jepkosgei (1:59.72) and Sydney gold medalist Maria Mutola (1:58.91), the two perhaps feeling that they needed to remind the world that they, too, can run a fast 800m.

World Champion Bernard Lagat, the silver medalist in Athens, fought his way out of a late-race box to finish fourth and advance in his 1,500m heat. In the fourth of four heats, Bahrain's Rashid Ramzi kicked off the fast pace to a 3:32.89, a mark quite close to the Olympic Record. They will run semifinals on Sunday.

Russian women dominated the first-ever Olympic running of the womens' 3,000m steeplechase, led by Gulnara Galkina-Samitova, who ran 9:15.17 in the first heat. The winner of the final will establish a new Olympic record.

Angelo Taylor (48.67) and Markino Buckley (48.65) were the fastest qualifiers in the men's 400m hurdles, but more notable in the one-lap barrier event was the end of the road for defending Olympic champion Felix Sanchez, who ran 51.10 in the fourth and last heat. Just ahead of Sanchez, two-time World Championships third-placer Dai Tamasue also failed to advance.

The women's Discus Throw qualifying was led by a 62.77m toss from American Stephanie Brown-Trafton. The men's Hammer Throw saw Krisztian Pars of Hungary produce the longest mark of the day, an 80.07m effort.

Competition resumes Saturday morning at 9:00 when the men's 20km walk steps off.