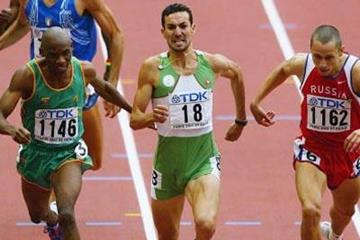 Being overlooked played into Said-Guerni's hands

The only thing about the men's 800m final that was predictable was it's unpredictability.  But even then, Algerian Djabir Said-Guerni was on few observers' radar screens.  And being ignored suited him just fine.

"It was a good position for me to be an outsider," said Said-Guerni.  "I was able to prepare very well."

His preparation showed.  Said-Guerni, The 2002 African Champion and bronze medallist at Sydney, immediately tucked in behind leader Wilson Kipketer from the gun, and was never further back than third.  Until, that is, his stunning finishing lunge to edge Russian Yuriy Borzakovskiy by just three one-hundredths of a second in 1:44.81.  Only the 1999 World Championships race in Sevilla, with a two one-hundredths margin of victory, was closer.

The stunning victory capped a tremendous comeback for the 26 year-old Siad-Guerni, who lives just three kilomters from the Stade de France.  After his bronze medal performances in Seville and Sydney, he was sidelined with a serious achilled tendon injury the following year.  So close to the pinnacle of his event, his career was in jeopardy of coming to a sudden end.

"I was injured in 2001, and was out of track for a year," he said.  "Last year I was in good shape, I won the African champs, and this year I was getting my rhythm back. I had some problems in May and June when my father was sick, and after I did some meets, I was out of competition.  People forgot about me."

"It's very difficult to come back after your doctor tells you that you have to stop your career," he said, "which is what happened for me."

Before the race, he said, he was hoping for a fast start, but didn't get it.  For a seasoned tactician, adjusting wasn't too much of a problem.

"I saw the startlist, and I knew that the Brazilian [Osmar Barbosa Dos Santos] was in the final.  I was happy because I knew that he was very tough in the first 400, so I went behind him."  When Dos Santos wasn't leading 200 metres into the race, the Algerian said he gave world record holder Wilson Kipketer some encouragement.  "I pushed Kipketer a little to do the leading, and stayed behind him."

Most 800m runners don't like the idea of Borzakovskiy attacking strongly from behind, but for Said-Guerni, the Russian's tactic fit perfectly into his.

"When I saw Yuriy coming in the last 200m, it was really great for me because it was the only serious solution --to be in third position heading to the finish.  And then when I saw him in the last 20 meters, getting a little bit tired, then I just believed I could do it.  And I did."