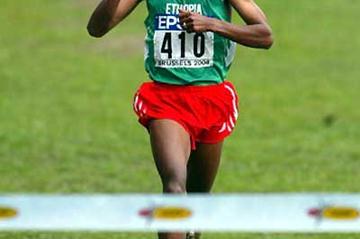 Bekele continued his weekend romp in the Parc van Laeken today, with legs so fresh that he might have well been making his debut at these Championships. The 21 year-old who is now the most decorated cross country runner in history led home the first ever Ethiopian sweep of the men’s long course medals in 35:52.

Impressive in Bekele’s wake was Gebre Gebremariam (36:10) who took his second silver medal of the weekend beating Sileshi Sihine by one second in an aggressive sprint down the finishing straight. For Gebremariam it was an improvement on his bronze in this race last year in Lausanne.

Bekele “felt no effects from yesterday, and spent last evening relaxing and celebrating with the team,” though he did nothing as adventurous as taking a boat ride or a sight seeing tour of the city as was the case in Switzerland twelve months ago.

History was made with the completion of Bekele's triple double but will not be improved on by him at least, for he was quick to confirm after the race that he would never attempt the feat in future editions of the World Cross.

“I will not attempt to run both events again. History is made and I don’t believe anyone will come to threaten my record at cross country,” said Bekele.

Certainly Bekele's cross country reputation is secure for the foreseeable future and he can now focus beyond this discipline to outdoortrack World Records, the Olympic gold at 10,000m, and a possible unique triple of being a World champion at cross country and on the track, both indoors and out. This feat has never been achieved in the history of Athletics.

“If I never run cross country again, I will be happy. I have made history in my own name and with my team,” confirmed the six-time individual gold medallist.

The boys from Addis dominate

That Ethiopian team victory was in many ways as significant as either Bekele’s feat or the individual medal sweep. Yibeltal Admassu came home as the final team scorer in eighth place in 36:52, to complete Ethiopia’s total of 14 points.

The victory ended Kenya’s 18 year win streak but it is perhaps the pedigree of the defeated Kenyan squad which re-emphasises the scale of the Ethiopian rout. Kipchoge is the reigning World 5000m champion, Kamathi is the 2001 World 10,000m gold medallist, Talel is the 2002 Commonwealth 10,000m champion, and John C. Korir is a former double national cross winner...and out of a scoring position was 2001 World 5000m champion Richard Limo. This represents the elite of Kenyan running, and if this combination couldn’t threaten the boys from Addis Ababa then who can?

“Kenya had dominated the World Cross for nearly twenty years, so this result could not have been better,” smiled a delighted Bekele.

The first three 2km laps were beaten out at approximately six minute pace but what shook up the race was Bekele’s 5:52 fourth lap, which he compounded with a devastating 5:47 penultimate circuit. The last lap went back to a 6:07 beat but by that time the battle was over, as Bekele finished with a huge 18 second margin over Gebremariam.

Kipchoge and Kamathi had taken the race to the Ethiopians, pushing the early pace but all the time Bekele and Sihine were lurking at their shoulders. Gebremariam was not visible in these early stages but made a determined drive through the field to join the leading pack late on the third lap.

With Bekele significantly upping the tempo in the fourth lap, Kipchoge was finally dropped and the three green vested Ethiopians soared away to their historic and virtually unopposed team win.