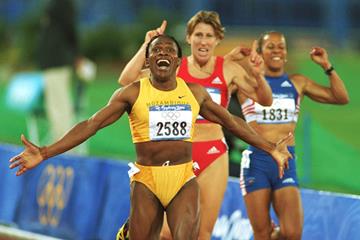 "Believe in yourself and live life to the full" - Maria Mutola

The 800m star took time out of her schedule to talk to Kamlesh Seeruttun and Reynolds Quirin about the difficult moments in her life, about her parents and her gold medal victory at the Sydney 2000 Olympics. She talks about her father, who passed away two years ago, with nostalgia and emotion as she clasps the coveted Olympic gold medal in her hands. "He taught me the meaning of life" she adds, her voice choked with emotion. The message that Maria Mutola is sending out to the thousands of people who find themselves in difficult circumstances, is simple: "You must always believe in yourself and live life to the full".

Maria Mutola, tell us the reasons for your visit to Mauritius?
I was invited here by the Mauritius Commercial Bank to talk about my Foundation, the Maria Mutola Foundation, which aims to develop sport in Mozambique. This has also been an opportunity for me to discover Mauritius and its people.

Rumour has it that it was the Mozambican poet Jose Craveirinha who advised you turn to athletics, as he saw no future for you in football?
In fact, he introduced me to athletics, as I knew nothing about running. Before Jose Craveirinha talked about athletics, I played a lot of football and did some swimming. Jose saw that I was one of the fastest players on the field, so he suggested I try it out…

Any thoughts on going back to football?
I’m having such a great time in athletics at the moment, that I find it hard to consider chasing after a football again.

Your father played a very important role in your life, could you tell us a little about him?
My father was a great source of inspiration for me. He always backed me in my career choices, and he has always wanted me to do my best at whatever I undertake. Unfortunately, he was the victim of a car accident two years ago, just two weeks before I was scheduled to take part in the World Indoor Championships in Paris. I went home to Mozambique immediately for the funeral and to see my relatives. I did not want to go to the World Indoors as I was in a lot of pain, but my mother and sister insisted, so I went, and I won the gold medal for my father. My father taught me how to be a good person, how to be someone that always gives their utmost to make their dreams come true. He also gave me faith in God. He encouraged me to leave Mozambique to go and train in the United States, but he did make me promise to never change nationality.

Tell us about the Chamancula, the suburb in Maputo where you come from.
(Her eyes light up) Ah,yes, that is where I grew up with some fantastic memories. It is a suburb that has a great sporting tradition, many of Mozambique’s best football players came from there. Sport is very strongly engraved in the culture of Chamancula, and all the members of my family embraced this tradition, my brother was a member of the national basketball team. My father also liked to encourage our interest in sport.

What does this Olympic gold medal represent for you?
It represents a lot! This medal is the reward for many sacrifices, hard work and effort. I will keep on running, even though I think it is even more difficult to stay at the top, once you have reached the ultimate level of becoming Olympic champion. There is a lot of pressure placed on my shoulders, but I accept if gladly.

What would you say to the many young people who find themselves in difficult circumstances?
I would ask them to believe in themselves and in what they do, to never give up, and to live life to the full. It is very important to know what you want from your life, if not, you cannot achieve your ambitions and end up very frustrated.