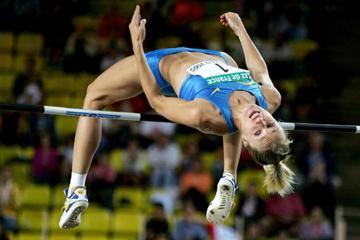 Bergqvist is appointed as UNICEF Ambassador

The Swede, who is also the reigning European champion and has twice won the World Indoor title, turned 29 years of age only 11 days ago, and will be responsible for furthering awareness of current UNICEF initiatives including improved education for girls and prevention of child trafficking.

Bergqvist won gold at this year's World Championships, completing an astounding return from a career threatening Achilles injury in 2004, and joins UNICEF Ambassadors such as actors Roger Moore and Nicole Kidman, and football star David Beckham.

“Through strengthening all children's rights, one can make the greatest difference in the world,” said Bergqvist, who will travel in November to Malawi for a firsthand look at UNICEF's work with HIV-infected children.

“I have been involved in rights for children ever since I was at my first training session in South Africa, and with my own eyes saw shantytowns rife with AIDS and many children orphaned.”

UNICEF is one of three United Nations organisations involved in the IAAF’s ‘Athletics for a Better World’ humanitarian project, click here to find out more.

Bergqvist is the IAAF World Ranked number one for the High Jump and had an unblemished year of 13 competition victories (finals) which included her 2.02m win at the World Championships in Helsinki (8 August). Her highest jump was the 2.03m victory in Sheffield (21 August), which is the best performance in the world in 2005. She closed out her season in style by winning the World Athletics Final with a 2.00m leap in Monaco on 9 September.

Agencies and Chris Turner for the IAAF