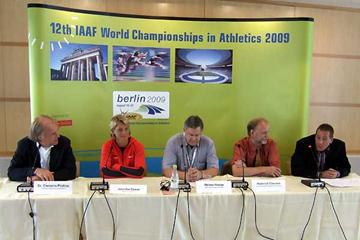 For those who read on, no you haven’t overslept and missed the 2007 World Championships in Osaka, Japan, or the Beijing Olympics of 2008 for that matter. Today, the hosts of the 12th edition of the IAAF World Championships in Athletics, Berlin, Germany, which takes place in 2009, took the opportunity of this week’s European Championships in Sweden’s second city, to introduce themselves to the world’s press.

Conscious not to conflict with the build up to the 11th IAAF World Championships in Athletics which takes next year in Osaka, the Berlin 2009 local organising committee (LOC) led by its president Dr. Clemens Prokop, held their first international press conference just outside the precincts of the Ullevi stadium. Announcing that their preparations are already well into gear, Prokop confirmed that a present full-time staff of seven would enlarge to approximately 50 personnel by the time the championships take place in three years.

Also included on the panel of speakers was Heiner Henze, the CEO of the LOC, who confirmed that with “three years to go, we have done our homework quite well….” Commenting on Berlin Olympic stadium’s now famous blue track, he also commented that “we expect blue skies over Berlin 2009…. Blue is the colour of reliability, a confirmation to the athletics family of the world that these championships are in safe hands.”

Heinrich Clausen, the Event Manager of the LOC, promised they are planning new initiatives regarding the staging of the road events to bring them to a greater audience. He also said that with their secured allocation of 9000 rooms in the city, especially two large athlete hotels - one of which the Hotel Estrel, has over 950 rooms - they hope to create an “Olympic village” style atmosphere particularly for the athletes.

And one of those possible athletes, Jennifer Oeser, 22, who finished fourth in yesterday’s Heptathlon in Gothenburg in a personal best of 6376pts, and hopes to peak her career at Berlin 2009, was also on hand to give her backing to the LOC.

“My dream is to do well in the Heptathlon at a major championship in my own country,” confirmed the smiling European U23 champion of 2003. “It was good to see Carolina Klüft do so well here in front of her home fans, and I hope the spectators will be just as good in Berlin, so as to help my dream at home to come true.”