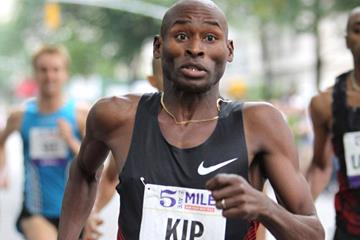 Bernard Lagat, five times a world champion on the track indoors and outdoors, will be aiming for another mark in the record books when he makes his 10km road race debut on 10 May at the Morrisons Great Manchester Run, an IAAF Gold Label Road Race.

The 40-year-old US distance runner has been rewriting the over-40s masters world record book during the 2015 indoor season and has pledged to have a crack at Haile Gebrselassie’s tough 10km age-group time of 28:00 when he lines up in Europe’s biggest 10km road race.

“That is a really quick time but it is good to shoot at something,” said Lagat. “I am going to train hard with my coach in Flagstaff, Arizona and I think I will shoot for that record.

“It is not going to be easy. It is like running two 14-minute 5km races back to back. That is something fast, but I will give it my best shot.”

“It is going to be my debut, because I have never run a 10km road race,” said the Kenyan-born runner, the second-fastest man in history at 1500m, behind Moroccan world record-holder Hicham El Guerrouj, with a time of 3:26.34.

“The only time I remember running 10km was in cross country at university level, so the time that I run is going to be a personal best.”

Despite turning 40 in December, Lagat remains one of the world’s leading middle and long distance runners.

Running in the French city of Metz last Wednesday, Lagat broke the M40 3000m world best for the third time this season, winning in 7:37.71. At the Millrose Games in New York last month he also smashed Eamonn Coghlan’s M40 world indoor mile best with a time of 3:54.91.

In all, in the space of 18 days last month, Lagat set six world indoor age-group marks.

“My manager, James Templeton, told me about the history of the race, that runners like Haile Gebrselassie and Kenenisa Bekele had won it,” said Lagat. “It is a tall order to follow people like that but then it’s nothing that I cannot get ready for.

“I think I can handle long training now. I have run a half marathon in difficult conditions. If I prepare well I think I could do something good.