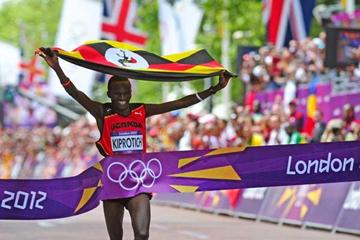 After London’s brilliant Olympic Games in 2012, racing returns to the capital’s streets on 21 April when the world’s best runners will battle it out over 26.2 miles to triumph at the 2013 Virgin London Marathon, an IAAF Gold Label Road Race.

The race will feature the best elite men’s Marathon field ever assembled and will include 11 men who’ve completed the distance in under 2:06, all three medallists from the London 2012 Olympic Games Marathon and the winners of the 2012 Berlin, Chicago, London, Frankfurt and Dubai Marathons.

Uganda’s Stephen Kiprotich, the surprise winner of the London 2012 Olympic Games Marathon, will return to the capital to do battle with Kenya’s Olympic silver medallist and World champion Abel Kirui as well as the latter’s compatriot and Olympic bronze medallist Wilson Kipsang.

This time, Kipsang will face stiff competition in April from his countryman Lel but also another outstanding Kenyan, Patrick Makau.

As the World record-holder with 2:03:38 and winner of the 2012 Frankfurt Marathon, Makau will arrive in the capital with one goal: to add the prestigious  London Marathon title to his already impressive CV.

Kenya’s Geoffrey Mutai will also be out to win when he runs his first London Marathon this year.

Despite failing to gain selection for the Kenyan Olympic marathon team, Mutai is considered by many to be the world’s best marathon runner, especially after his win at the 2012 BMW Berlin Marathon last September.

The Ethiopians should not be overlooked either. Tsegaye Kebede, who won the 2012 Bank of America Chicago Marathon and the 2010 London Marathon, could cause an upset.

His countryman Ayele Abshero is also capable of spoiling the Kenyan party after running the sixth fastest marathon ever when he won the 2012 Dubai Marathon in 2:04:23.

In the women’s race, Ethiopia’s Tiki Gelana should be the one to watch after her win at the London 2012 Olympic Games Marathon.

Gelana also won the 2012 Rotterdam Marathon in a time of 2:18:58, which makes her the fourth fastest woman in history.

The Kenyan trio of Florence Kiplagat, Edna Kiplagat and Priscah Jeptoo could also challenge for the London title.

World champion Edna Kiplagat will be hoping to improve on her third-place finish at the 2012 Virgin London Marathon, while Jeptoo will be aiming to go one better than her silver medal at the Olympic Games, and Florence Kiplagat will also be looking to build on her win at the 2011 BMW Berlin Marathon.

Gelana isn’t the only Ethiopian runner who could challenge for the top spot in London.

Tirunesh Dibaba – five-time World cross-country champion, London 2012 Olympic 10,000m champion and Beijing 2008 Olympic 5000m and 10,000m champion – will make her debut at the Marathon distance in London. The world is waiting to find out whether the Ethiopian runner’s talent extends to the longer distance.