Keely Hodgkinson is set to return to the scene of her 1:57.20 800m when she lines up in the Birmingham World Indoor Tour Final, the climax of the 2023 World Athletics Indoor Tour Gold series, at the Utilita Arena on 25 February.

The 20-year-old Olympic and world silver medallist broke the British indoor record with that performance at this year’s meeting in Birmingham, running the fastest indoor time for 20 years. It is a mark that puts her sixth on the world indoor all-time list.

With the 2022 indoor season setting Hodgkinson up for an outdoor season of medal wins at the World Athletics Championships Oregon22, Commonwealth Games and European Championships, she will again take on some of the best in the world in Birmingham, wanting a similar springboard to success for 2023.

“The Indoor Grand Prix earlier this year was an incredible experience as it was one of the first big crowd atmospheres I had experienced coming out of the pandemic. I’ve no doubt the atmosphere at the Arena, with that amazing crowd, played a big part in helping me run fast and I can’t wait to feel that support again,” said Hodgkinson.

“I’ve got high expectations for what I want to achieve in 2023 and I know that starting off strongly with a great indoor season will really get the ball rolling.”

The Birmingham World Indoor Tour Final is the last of the seven meetings that in 2023 will make up the World Athletics Indoor Tour Gold series. The season starts in Karlsruhe, Germany, on 27 January before stops in Boston, Torun, New York, Lievin, Madrid and then Birmingham.

The women’s 800m is among the scoring disciplines on the World Athletics Indoor Tour Gold for 2023. Each athlete’s best three results will count towards their overall point score. The athlete with the most points in each scoring discipline at the end of the tour will be declared the winner and will be awarded a USD$10,000 bonus. They will also be offered a wild card entry for the World Athletics Indoor Championships Glasgow 24. 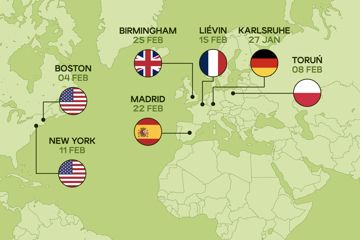