Bolt, who recovered from a slow start to catch up and pass the faster starting Asafa Powell by the half way stage, won in 9.86sec (wind: -0.2m/s).

Bolt, who had time to point both index fingers at chest height, got in ahead of his Beijing's sprint relay teammates Powell (9.97) and Michael Frater (10.02).

"It (race) was good," Bolt said. "The execution was good. I think I got a fairly good start, which was good, because that was always the main problem for me," he added.

"I think I got that right and my drive phase was right. I am now looking forward to get into better shape," added Bolt, whose training was set back after a car accident in April.

Powell was also happy with his result. "It was a fairly good race because I am basically running on one leg, so I'm fairly happy. The aim was just to finish in the top two," he said.

Fraser back to top-form following operation

Fraser, who had appendix surgery in April, was happy to be back in the fast lane."It has been a bad season for me, frustrating, but my coach has really motivated me," explained a happy Fraser.

Earlier, Olympic 100m silver medallist, Sherone Simpson, in her first race after knee surgery, failed to make it to the final after finishing fifth in her heat in 11.64.

In the 400m Hurdles, Isa Phillips won the men’s event in a world season leading 48.05, while Olympic champion Melaine Walker took the women’s event edging Kaliese Spencer at 54.70 by .01 of a second.

Kaliese Spencer, who led Walker metres to the tape, was second in 54.71 with Nickiesha Wilson third in 56.01. 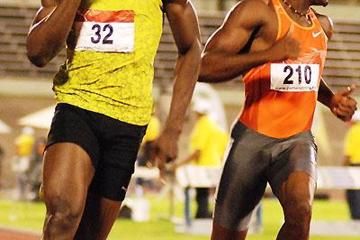