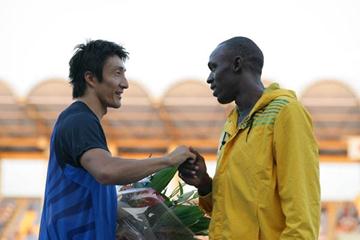 Nobuharu Asahara and Usain Bolt on the podium in Kawasaki, Japan. It was Asahara&#39;s final race; Bolt was a VIP guest of the meeting (Kazutaka Eguchi./Agence SHOT) © Copyright
23 SEP 2008 General News

Kawasaki is situated just south-west of Tokyo, and competitions were played out in Todoroki stadium, the site of this year’s national championships, under a sunny sky with a top temperature of 26.9C.

The meeting also featured the final race for Noboharu Asahara, 36, who has been the premier sprinter in Japan for many years.

Poland’s Beijing champion Tomasz Majewski took the lead in the men’s Shot Put with a 19.37m release in the second round and never relinquished his lead. He improved to 19.63 in his fourth throw, while Ukraine’s Yuriy Bilonog, his predecessor as Olympic champion, could not put past 18m. He failed to improve his first throw of 17.66m and finished a distant second.

Murofushi took the lead with a 77.49m first round throw, while Pars’ first throw was 77.18m. Both throwers steadily improved with each round, with Pars going ahead with 80.67m in the fourth series of efforts. But Murofushi was not finished yet. He regained the lead with his sixth and final throw of 81.02m to win the competition, while Pars failed to improve.

Tatyana Lebedeva, the 2004 Olympic and 2007 World champion at the Long Jump, won this event today with a 6.81m performance. The Beijing silver medallist completely dominated the competitions, as any of her jumps, except for the first one, would have won the competition. The Japanese record holder Kumiko Ikeda was distant second with 6.45m.

Donald Thomas, who came from nowhere to win the High Jump in Osaka last year, won his specialty with a leap of 2.24m in Kawasaki, while Japanese national record holder Naoyuki Daigo finished second with 2.21m.

Although Kenji Narisako started the men’s 400m Hurdles fast and led most of the race, USA’s 2005 World Champion Bershawn Jackson, the bronze medallist in Beijing, came from behind to take the lead for good at tenth hurdle and won with 49.33.  Narisako finished second with 49.68.

Two athletes who finished just out of medals in Beijing, Derek Miles and Damu Cherry, won in Kawasaki. Miles won the men’s Pole Vault with 5.60m. Daichi Sawano, the Japanese national record holder, also cleared 5.60m, he took two attempts to do so, while Miles cleared on his first attempt.

Although Candice Davis led the women’s 100m Hurdles until the 9th barrier, Damu Cherry came from behind to snatch the victory with 13.07, six one-hundredth ahead of Davis.  An hour and half later, Davis finished second at flat 100m, while Cherry was fourth in the same race, which was won by Chisato Fukushima, the Japanese national record holder at 100m.

Other notable athletes in the meet were Briton Marlon Devonish, who won the men’s 200m and Hyleas Fountain, Beijing Heptathlon silver medallist, who finished third in both 100m Hurdles and Long Jump.

Asahara says his goodbyes and is greeted by Bolt

In Beijing, his fourth Olympics, Nobuharu Asahara anchored home the Japanese bronze medal winning 4x100m relay team, and in an emotional last race of his career Asahara competed along with his Olympic team-mates, Naoki Tsukahara, Shingo Suetsugu and Shinji Takahira, in the 100m in Kawasaki.

At the pre-meet press conference, Asahara said he would like to give what ever he has left in him, and asked his team-mates to give their 100% in the race also. He did not want any of his team mates to hold back so Asahara could win the final race of his career.

Tsukahara, the Beijing Olympic relay-lead off man started well and led for the first half of the 100m. However, he was passed by Asahara, Harry Aikines-Aryeetey of GBR and Michael Rodgers of USA in the last 50 metres to finish only fourth.

Aikines-Aryeetey won with 10.19, followed by Rodgers and Asahara.

“It wasn’t my best race, but it was exciting to run in front of so many fans. It was quite appropriate for my final race,” said Asahara who was greeted on the podium after the race by Jamaica's mutliple Olympic champion Usain Bolt who was attending the meeting as a VIP guest of the meeting organsiers.

Ken Nakamura for the IAAF
Assisted by Akihiro Onishi