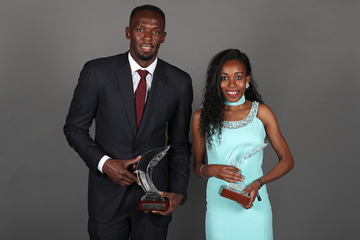 Olympic champions Usain Bolt, Mo Farah and Elaine Thompson are among the nominees announced for the 2017 Laureus world sportsman and sportswoman of the year awards.

In similar fashion, Farah, 33, successfully defended his Olympic titles at 5000m and 10,000m to become only the second man to achieve the back-to-back "double double" over the distances.

Thompson, who won the Olympic 100m and 200m titles in Rio, was nominated for the World Sportswoman of the Year Award. US sprinter Allyson Felix, the Olympic 400m silver medallist, was also nominated in the category.

Outside of athletics, tennis star Andy Murray and NBA stars LeBron James and Stephen Curry were also nominated in the men's category. Other women nominated for the top honour include gymnast Simone Biles and swimmer Katie Ledecky of the US, German tennis star Angelique Kerber and British cyclist Laura Kenny.

Elsewhere, Almaz Ayana of Ethiopia and South African Wayde van Niekerk were nominated for the World Breakthrough of the Year award. Both set world records in Rio, Ayana in the 10,000m and van Niekerk in the 400m. In December, Ayana and Bolt were named Athletes of the Year at the IAAF Athletics Awards 2016.

Ruth Beitia, Spain's Olympic and European high jump champion, was among the nominees in the Comeback of the Year category.

The nominees were selected following a ballot by the world's sports media. The winners will be announced at the Laureus World Sports Awards ceremony in Monaco on 14 February.