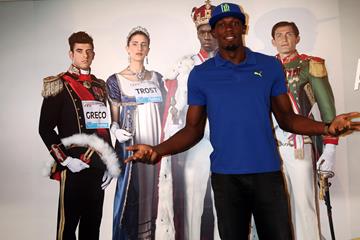 Two days before his much-awaited 100m race Bolt, showing his familiar relaxed mood ahead of his first European race of the year, talked about his plans for the season and his expectations for Thursday’s race.

Bolt has won at the last two editions of Rome’s meeting; in 2011 in 9.91 and in 2012 in the meeting record of 9.76. This time he will face Olympic bronze medallist Justin Gatlin who has already won two legs of the IAAF Diamond League this year in Doha in 9.97 and in Eugene in a wind assisted 9.88, and who has a legal seasonal best of 9.91 set in the IAAF World Challenge meeting in Beijing. Rome’s dash will also feature 2003 World 100m champion Kim Collins and 2010 World indoor 60m silver medallist Michael Rodgers, who finished second in Eugene in a windy 9.94 and has clocked a legal 9.96 this year.

The 2013 Golden Gala is dedicated to the memory of Pietro Mennea, the Italian sprint legend who died on 21 March this year. Mennea won the 200m Olympic title in Moscow 1980 and held the 200m World record which withstood all assaults for 17 years before Michael Johnson broke it with 19.66 at the 1996 US Olympic Trials.

Mennea met Bolt two years ago during a kids’ clinic on the eve of the Golden Gala, and the “Lightning” Bolt from Trelawny will be looking to take his third consecutive Rome win to honour the memory of the Italian sprinter nicknamed the “Southern Arrow” who won the 200m European title in this stadium in 1974 and two editions of the Golden Gala in 1980 and 1983.

Do you remember your first ever win?

“When I won my first race, athletics was just a joy. It’s still a joy but when I started it was pure enjoyment.”

What do you expect from Thursday’s race?

“I feel great. Everything is perfect. I am looking forward to running in Rome. In the last weeks I worked on speed and endurance.”

Have you changed your training from last year?

“So far we are working on both speed and endurance. During the season I will decide with my coach on what aspect we will work, whether we will focus on either speed or endurance. It depends on how the season goes.”

You ran 10.09 in the Cayman Islands in your first 100m race at the beginning of May. What went wrong in George Town?

“I did not have a good race there but I worked with my coach on the aspects which went wrong. I am not worried about it because it will be a long season.”

Some athletes are suffering from injury problems in the post-Olympic season. How do you feel now?

“In the Olympic year every athlete pushes harder and it’s normal that some athletes get injuries. We have worked on preventing injuries and I am now in good shape.”

You met Mennea two years ago on the eve of the Rome meeting. What is your memory of Mennea?

“I am proud to compete in this meeting. Great athletes like Mennea made their country proud. I hope that my fellow Jamaicans will honour me when I retire from sport in the same way Italy honours Mennea.”

Do you think that humility is a good value in sport?

“It is a great value to be humble. Everything is possible with hard work. I grew up according to these principles.  It’s important that athletes promote these values.”

You will run against Justin Gatlin in Rome. He started the season very well with wins in Doha and Eugene. What do you think about his results?

“Gatlin is in good shape but I am not worried about that. For me it’s all about championships. I am just focusing on myself.”

You have won everything an athlete can dream of. Do you still have dreams?

“I have accomplished all my dreams but I still have goals to achieve. I want to continue to dominate on the world stage in the next four years with hard work but I also want to continue enjoying my sport.”

Are there new Jamaican sprinters coming out?

“There will always be new Jamaican talented sprinters coming out. I saw at the Youth Championships in my country that there are young guys who are running fast but I still beat them!”

You are a big fan of Manchester United football club. What was your reaction when you heard the news that Sir Alex Ferguson retired as a manager after 27 years?

“It was a stressful day when I heard the news that he was going to retire. He is a great man. We are good friends. I don’t know if the new manager will be able to achieve the same results.”