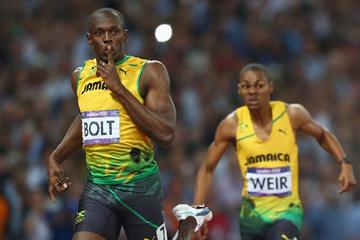 The 2013 Jamaica International Invitational Meet (JIIM) on 4 May will see Usain Bolt have his first 200m outing of the year.

Bolt, after weighing up the pros and cons of which event to run at the IAAF World Challenge meeting, which will be held in Kingston’s National Stadium, will contest the longer sprint, which will now be the final event of the night.

It will be Bolt’s first truly serious race of the year after two 400m outings, a leg in a 4x400m Relay and his recent 150m on Rio’s Copacabana Beach.

The six-time Olympic gold medallist should get some good competition from his training partner and 2012 Olympic Games 200m bronze medallist Warren Weir, as well another fellow Jamaican and the 2012 Diamond Race winner Nickel Ashmeade.

Into the bargain, US sprinter Wallace Spearmon, who was fourth in London over 200m, and Norway’s Jaysuma Saidy Ndure are in also in the 200m.

Felix, who has never faced Campbell-Brown on her home track, said: “It’ll be my first individual race (of 2013) and it’ll be the first time I’ve come to Jamaica since the World Juniors in 2002. I’m just excited to open my season and see where I am.”

The race will also be the first 100m of the year for Campbell-Brown. “I’ll be trying to see where I am at as well. It’s always a pleasure and it’s always so much fun and exciting to compete at home so I’m looking forward to entertaining all the fans that are coming out to support us,” commented the two-time Olympic Games 200m champion.

Trinidad and Tobago’s 2011 IAAF World Championships 100m bronze medallist Kelly-Ann Baptiste, who was sixth in the event at the London 2012 Olympic Games, and Ivory Coast’s US-based Murielle Ahoure are the other two confirmed names to line up alongside Felix and Campbell-Brown in the 100m.

Fraser-Pryce to duel with Knight

Two-time Olympic Games 100m champion Shelly-Ann Fraser-Pryce will run the women's 200m, and will have as her main opponent Bianca Knight, who ran the third leg on USA’s World record-breaking 4x100m team in London.

Jamaica’s Kerron Stewart, the 200m bronze medallist at the 2008 Olympic Games, will also be running.

The men’s 100m will now be missing local hero Yohan Blake after the reigning World 100m champion tore his hamstring last weekend at the UTech Classic.

Blake’s manager, Cubie Seegobin, said they wanted to avoid any risks and that he would not race for several weeks.

Seegobin said that Blake initially thought it was a slight cramp but, after he got a little swelling, they decided to do an MRI on Monday. “It showed that he had two very minor tears,” added Seegobin.

Nevertheless, the 100m still has an aura of class about it with the American pair of Ryan Bailey and Darvis Patton, Trinidad and Tobago’s Richard Thompson, along with Jamaicans Nesta Carter and Kemar Bailey Cole.

Jamaica’s Melaine Walker, the 2008 Olympic Games 400m Hurdles champion, is also expected to line up for her first race in the sprint hurdles event since 2006.

In the women’s 400m, another Beijing champion, Great Britain’s Christine Ohuruogu, will face Jamaicans Novlene Williams-Mills and Rosemarie Whyte. The pair, along with 2012 silver medallist Ohuruogu, were also both finallists in London over one lap of the track.

Also in the women’s 400m are two other top Jamaicans: current world leader Stephanie McPherson, who ran a personal best of 50.74 at the UTech Classic last Saturday, and Kaliese Spencer.

Dominican Republic’s Luguelin Santos, who went on from winning the World Junior title in Barcelona to silver at the Olympic Games last summer, is the big name in the men’s 400m, while the men’s 400m Hurdles has Trinidad and Tobago’s 2010 World junior champion Jehue Gordon and the USA’s two-time World champion Kerron Clement.

In the field events, the pick of them could be the men’s Shot Put with US big men Christian Cantwell and Ryan Whiting coming to Kingston to face Jamaican record-holder Dorian Scott.

“We are expecting to have an exciting meet, as always, and we have some very competitive races lined up, especially in the sprints,” said Dr Warren Blake, the chairman of the organizing committee.