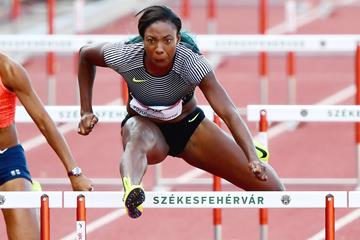 Organisers of the New Balance Indoor Grand Prix have announced that world champion Nia Ali and Olympic champion Brianna McNeal will go head-to-head in the 60m hurdles in Boston at the opening World Athletics Indoor Tour meeting of 2020 on 25 January.

With little more than two weeks to go, the women’s 60m hurdles is shaping up to be one of the most competitive events at the New Balance Indoor Grand Prix, led by McNeal and Ali – two of the most accomplished sprint hurdlers competing in the world today.

McNeal burst on to the international scene in 2013, a season which saw her win the NCAA, US and world titles in the 100m hurdles. She also earned the silver medal at the 2016 World Indoor Championships behind Ali, who won her second successive title in the 60m hurdles.

The two traded positions later that season, with McNeal winning the Olympic title in Rio and Ali taking the silver. Last year, Ali completed her second remarkable return from maternity leave to win gold at the World Athletics Championships in Doha in a time of 12.34, a lifetime best.

World 800m champion Donavan Brazier will be making his fourth consecutive appearance at the New Balance Indoor Grand Prix. The 22-year-old is coming off a remarkable 2019 season which saw him become the first US man to win Diamond League and world titles over 800m, the latter in a North American record of 1:42.34. His 2019 indoor season was also a huge success, setting a North American indoor record for 800m (1:44.41) and a world indoor best for 600m (1:13.77), the event he will contest in Boston.

Willis is a two-time Olympic medallist at 1500m and has won the New Balance Indoor Grand Prix mile a record six times. He broke the New Zealand record in Boston in 2015 with 3:51.61. Murphy became the first US man in 24 years to win an Olympic medal at 800m when he took bronze in Rio in 2016. Last year he won the US indoor title over 1000m and was a finalist in the 800m at the World Championships in Doha.