Laarbi Bourrada from Algeria and Germany’s Jennifer Oeser took the honours at the Erdgas Mehrkampf Combined Events Meeting in Ratingen on Sunday (17). Bourrada set an African record of 8302 while Oeser produced the second best performance of her career with a 6663-point tally.

The second day of competition in Ratingen, the German leg of the IAAF Combined Events Challenge, started on a cool morning. Despite the unfavourable weather conditions, Rico Freimuth started promisingly with a solid 14.14 in the 110m Hurdles and narrowed the gap on overnight leader Bourrada who clocked 14.65, from 181 to 116 points (5301 to 5185). Willem Coertzen from South Africa kept third place in the overall ranking with 5104 points after his 14.49 clocking. German Pascal Behrenbruch, sixth at the World Championships in Berlin, clocked 14.49 and was still on course for the 8200 points qualifying standard for the IAAF World Championships in Daegu.

Freimuth went to the lead after throwing 47.42m (817 points) overtaking Bourrada after the discus with a total of 6002. Bourrada, who is particularly strong in the jumping events, threw a PB of 40.34m and remained in second place with 5972, on course to break his own African record of 8171. Brazilian Carlos Chinin climbed into third place with 5933 points thanks to his best throw of 48.38m.

Freimuth cleared 4.80m in the pole vault keeping the overall lead with 6851 points. Bourrada kept his hopes to break the African record alive after vaulting 4.70m for a 6791 total. Chinin remained in third with 6693 thanks to his 4.50m clearance. Behrenbruch lost valuable points here where he didn’t manage to clear higher than 4.40m.

Behrenbruch however kept his hopes to set the Daegu qualifying standard after his impressive show in the javelin where he speared the implement to 71.40m (911 points), setting a PB and climbing into second overall with 7527 points behind Freimuth who remained below the 60-metres barrier in the first two attempts but set his PB with 65.04m in the third round (814 points) and carried a total of 7665 after nine events. Bourrada was third after nine events with 7500 points but could rely on his strong potential in the 1500m, one of his strongest events.

As predicted, Bourrada won the 1500m in 4:21.42 and took the overall win with an African record of 8302. Freimuth crossed the finish line in 4:49.44 and could celebrate his second place with 8287 which secured him at berth for the World Championships. Berhenbruch ran 4:36.17 and also qualified for Daegu with 8232.

The long jump was the highlight of the second day of the women’s Heptathlon. First, European under-23 champion Aiga Grabuste leapt to 6.62m (1046 points) aided by a tailwind of 3.5m/s. Then oeser, the World silver and European bronze medallist responded with an impressive 6.70m aided by a tailwind of +2.8 m/s (1072 points). After five events Oeser led with 4923 points to Grabuste’s 4804. Ramona Fransen kept her overall third place thanks to her 6.28m.

Former European bronze medallist Lilli Schwarzkopf won the javelin, one of her strongest events, with an outstanding 51.75m (894 points) and climbed into third place with 5458 points. Oeser also performed admirably, reaching 47.19m to remain on course to break her 6683 PB set last year at the European Championships in Barcelona. Julia Machtig speared the javelin to 48.01m remaining on schedule to qualify for Daegu.

Oeser clocked 2:12.09 (934 points) in the 800m crowning a great weekend of competitions with 6663 points, the second best performance of her career, which came very close to her PB. Grabuste set a new Latvian record scoring 6507. Schwarzkopf qualified for Daegu with 6370 points which earned third place ahead of Dutchwoman Ramona Fransen (6198) and Machtig (6194) who also booked their tickets for Daegu. Sweden’s Jessica Samuelson, who won the 800m in 2:10.24, finished sixth with 6173 in a good-quality competition where the top ten scored more 6000 points. 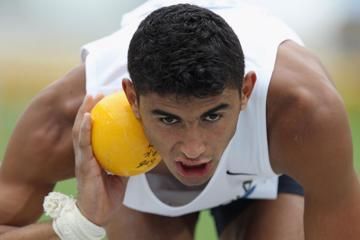