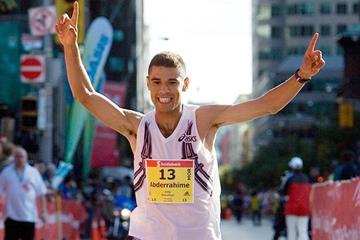 Seven years ago Morocco’s Abderrahime Bouramdane’s passport was stamped with a Canadian visa for the first time and he took full advantage, racing to second-place finishes in both the 2006 Ottawa and the 2006 Scotiabank Toronto Waterfront Marathons.

Two years ago he represented his country at the IAAF World Championships in Daegu, Korea where he narrowly missed a medal, coming home fourth. But it is his performances in World Marathon Majors that has earned him a reputation as a formidable competitor.

Bouramdane was second at the 2008 Boston Marathon, fourth at the 2010 London Marathon with a personal best of 2:07:33, and has twice finished fifth at the New York Marathon. He has also represented his country at two successive Olympic Games.

“I am feeling good, my preparation for the Toronto [Waterfront] Marathon is very good and, after being there seven years ago, I am very happy to come back and run a fast time again,” he said from his home in Fez, Morocco’s third largest city. “This year I had a small injury and didn't run the World Championships in Moscow but I will be in good shape for Toronto.

“I am in a high-altitude training program. I train one month in Ifrane then I go down to sea level for one week then come back to high altitude for another four weeks. I am running about 120 miles (200 kilometres) a week at the moment.”

Earlier this year he ran the Lake Biwa Marathon in a sort of ‘spur of the moment’ decision. He had geared his training towards the 2012 New York Marathon but, when the race was cancelled due to the aftermath of Hurricane Sandy, he and his manager Rachid Tbahi looked for an alternative plan. He ran a disappointing 2:14:14 in the Japanese race.

“I came back from New York to train for Lake Biwa,” he explains. “My agent told me ‘If you want to help the Lake Biwa organisers, go’ but I didn't have good time to prepare and I got an injury from this Marathon and so I didn't run for a while. Everything is good now.”

Bouramdane has overcome a lot to become a world-class marathon runner. At an early age his parents split up and he and his siblings went to live with his mother. He took on the responsibility of caring for his siblings.

“I went to a very good school but I came from poor people,” he says in a tone that suggests he’s proud of his family. “I worked and my life was very, very hard but now I am very happy because athletics changed my life. I met some nice people and I live a very nice life. It’s because of my running.

“My dad had a problem with my mum and they broke up. My dad lives alone and I lived with my mum and my five sisters and two brothers. I said ‘Mum you stop working and I will go to work.’ It was a very good decision to work. I went to work for my family.

“When I was 17 I got a job as a mechanic at a textile factory where they made cotton shirts and jeans. I worked for five years there but then made the decision to run. My family didn't like my decision to run. They wondered how I could make money. They said ‘don't stop working.’  I said I would run for one year. Now I am very, very happy I made the decision. Now I make money to help my family, my sisters and brothers.”

Bouramdane proudly mentions that his 21-year-old nephew, Mohammed Boulama, the son of his sister, represented Morocco at this year’s IAAF World Championships. He has run 8:21.62 for the 3000m Steeplechase.

Organisers of the Toronto race have nothing but praise for Bouramdane and welcome his ability to take on the East African talent from the front.

“It’s very special for us to have Abderrahime come back to Waterfront seven years later,” says race director Alan Brookes. “The 2006 race was a big breakthrough.  It was a cold windy day but, despite that, two outstanding talents Daniel Rono and Bouramdane had this battle and came close to Waldemar Cierpinski’s Canadian all-comers’ record (2:09:55) which had stood since the 1976 Olympic Games (and has since been broken). That kind of put us on the international circuit for the first time.

“There have been so many good athletes over the years who have begun their careers in Toronto and Bouramdane and Rono were the first. Abderrahime has been part of our emergence as an international event.”

Today Bouramdane draws a salary from Japanese athletics company Mizuno and earns prize money at races around the world. He is fully aware that there is a $35,000 bonus for breaking the Canadian all-comers’ record of 2:07:58, which was set by Kenneth Mungara at the 2010 Scotiabank Toronto Waterfront Marathon.

With defending champion Sahle Warga of Ethiopia already confirmed, the race is shaping up to be another barnburner. Bouramdane would like nothing more than to add to his impressive list of credentials with a victory on the streets of Toronto. As he says, if the conditions are right, he is prepared to run very fast. And that’s very good news for race organisers.