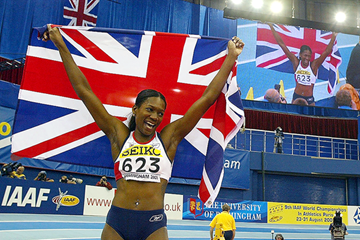 There are exactly 200 days to go until the IAAF World Championships London 2017 when Britain will stage the IAAF’s flagship event for the first time.

Britain is one of just five countries to have hosted IAAF championship events across the four main competition surfaces – outdoor track, indoor track, road, and cross country – and here we look back on their history of staging these events.

The racecourse in the Welsh town of Chepstow was the setting for Britain’s first ever IAAF championship event. Iberian athletes won the senior individual titles as Portugal’s Carlos Lopes won the men’s race and Spain’s Carmen Valero won the women’s. But England, entered here as a separate nation, won the senior men’s team title, much to the delight of the home crowd.

Mexican athletes dominated the competition, taking gold and silver in both the men’s 20km and 50km events as well as winning the team event.

Bellahouston Park was the setting for the first of five senior women’s world cross-country titles for the late Grete Waitz. As was the case two years earlier, there was success for the host nation as individual winner Mick Morton led England to team victory in the junior men’s race.

Waitz once again won the senior women's title, completing her record streak in the same country where it began. The senior men’s race was one of the closest in World Cross history as all three podium finishers were given the same time with Ethiopia’s Bekele Debele coming out on top.

The tiny village of St John’s on the Isle of Man welcomed 158 of the world’s top race walkers in 1985. Spain’s Jose Marin, who was 35 at the time, became – and remains – the oldest man ever to win the 20km at the championships.

Before this team competition became part of the marathon at the IAAF World Championships, it was staged in conjunction with various other marathons. In 1991 it formed part of the London Marathon and Britain won the men’s team title.

Britain’s first IAAF track and field competition was the 1994 IAAF World Cup, the forerunner to the IAAF Continental Cup. The three-day event ended on a high with the hosts winning the men’s 4x400m, but it wasn’t enough to catch Africa in the overall standings as they won the men’s team title. With victories in four of the six field events, plus a rare 100m-400m double from Irina Privalova, Europe won the women’s team title.

Paul Tergat landed his first major title in 1995, winning the senior men’s race at the World Cross in Durham. Ethiopia’s Derartu Tulu, the Olympic 10,000m champion at that time, won the senior women’s race, but Kenya swept all four of the team titles.

Just like fellow five-time winner Waitz, Tergat’s streak of world cross-country victories began and ended on British mud. The Kenyan won his fifth and final individual title in Belfast in 1999, while Paula Radcliffe gave the home crowd something to cheer by taking bronze in the senior women’s long race.

An exciting men’s 400m final, Carolina Kluft’s big breakthrough and Svetlana Feofanova’s world indoor pole vault record were just some of the highlights of a memorable championships at Birmingham’s National Indoor Arena. But the loudest cheers came when Britain’s Ashia Hansen uncorked a fifth-round leap of 15.01m to take gold in the triple jump.

Having been dethroned as the world cross-country champion one year prior in Mombasa, Kenenisa Bekele returned to the top of the podium in Edinburgh in 2008, winning a record 27th medal as Ethiopian athletes won all four of the individual titles on offer.

Zersenay Tadese and Mary Keitany cemented their status as the world’s best runners over 13.1 miles when taking the individual titles in Birmingham. It was Tadese’s fourth consecutive victory, while Keitany broke a nine-year drought of individual women’s titles for Kenya.

The 2016 World Half Marathon Championships was one of the most competitive but also one of the toughest, given the cold conditions and torrential rain. Geoffrey Kamworor powered his way through to storm to successfully defend his title while Mo Farah took bronze for Britain. Peres Jepchirchir led a Kenyan sweep in the women’s race.

Fittingly, the 2017 World Championships will be the 17th IAAF competition held in Britain. Held in the same stadium that hosted the athletics at the London 2012 Olympic Games, the event is expected to attract nearly 2000 athletes from more than 200 countries.