Britain’s multiple Olympic and world champion Mo Farah sat in the King Baudouin Stadium today contemplating his prospects of breaking the world one-hour record on the track at the Wanda Diamond League meeting tomorrow evening – and if he mentioned the word “exciting” once, he mentioned it 10 times.

While he is keyed up by the prospect of eclipsing Haile Gebrselassie’s distance of 21,285 metres, set in 2007 at Ostrava, it is the idea of being back on a track that most energises this 37-year-old who has had second thoughts about his shift to road racing.

“As an athlete you never quite appreciate what you have until you walk away from it,” he said. “And then you realise. I miss the track. I’m really excited to be back on it in Brussels. I’m like a little kid waiting to see what I can do tomorrow.

“When it was decided that the Olympics were not going to happen this year, it was probably a good thing for me. The reason is I can get back on the track and racing again and starting to build my confidence, get a few races under my belt. But the most important thing is staying injury-free.”

Farah reflected that, at the time he turned to road racing in 2017, he had grown a little weary of track racing. “I got to a time when it was hard to motivate myself, in my heart.

“I would do the training and I was like, ‘yeah, I’ve won all the medals, I want something to excite me. I tried the marathon. I got the British record. It was OK, and I was excited. But not so excited as I was on the track. That’s the reason I decided to come back. It’s just different. It’s something I miss, I genuinely do miss it.”

And defending his Olympic 10,000m title in Tokyo next summer is foremost in his mind.

“After this race I will be looking at doing a half marathon in Ireland. From there I will plan a bit more. But Tokyo is the big one.

“I believe I’m stronger than I was. Having marathons under my belt made me stronger. My legs have taken more mileage. I will just continue to push on.”

Farah will be in company with the friend and training partner with whom he has been preparing in Font Romeu, Belgium’s very own Bashir Abdi, European 10,000m silver medallist in 2018, who ran a Belgian record of 2:04:49 at the Tokyo Marathon earlier this year before the worldwide coronavirus lockdown.

“We haven’t talked in great detail about what we are capable of running,” said Farah. “The thing is to get through first half and see where we are, see who is feeling great that can take the lead and push on.

The European record still stands to Jos Hermens, who achieved 20,944 metres in 1976.

Like Farah, Bashir is looking forward to his novel challenge.

“The last time I ran on the track was in 2018 at the Memorial Van Damme,” said Bashir. “It was a great way to say goodbye to the track. But now I’m very happy to be back. I was one of the athletes who were lucky enough to run a marathon this year and now I feel like I’m running half marathon on the track.

“But I have never been programmed to run laps, laps, laps. It’s something that I was not used to. I am used to running straight.”

Farah appears more relaxed about the coming challenge. “When I’m on the track I don’t mind doing a half marathon. I enjoy it,” he said. “I just focus on it, just get it done. I can’t wait to get on the start line tomorrow.”

Asked how much it would mean to break a world record held by Gebrselassie, Farah responded: “Any word record is not easy. At the same time it’s something I want to have and I want to see what I can do tomorrow. But the most important thing is to get through the race – you can’t be thinking all the time about the European record held by Jos (Hermens) or the world record held by Haile. You have to try to enjoy it.

“It’s been a strange year for all of us. I’m a family man, I’ve got four kids, it hasn’t been easy, you haven’t got a routine where kids go to school and have activities. But we have to support the system and make the most if it.”

Bashir took the opportunity to go home to Somalia – both he and Farah were born in the capital, Mogadishu. “It was the first time in five years that I’ve been home for so long,” he said.

Simulated crowd noise will help the runners along tomorrow night, and Bashir and Farah will speed their own progress with a carefully chosen soundtrack.

“I think it’s really important to get through mentally,” said Farah. “Sometimes if you are going through a bad patch certain songs can help you get through it.”

Bashir added: “Nothing can replace the spectators at the Van Damme but I think it is great to have a couple of things to make the stadium more alive.”

When Bashir’s marathon best was mentioned, Farah immediately exclaimed: “Faster than me!” The time did indeed better the Briton’s 2017 Chicago time of 2:05:11.

But Farah’s friend and training partner was frank about his prospects tomorrow.

“I think the question is not if I can beat Mo, it is how long can I stay with him? Of course I will give 100 per cent, but I think he is faster than me. I think he was better than me in training. I have to be honest with myself – I will stay with him as much as possible.”

While Farah and Bashir face off in the men’s hour race, the women’s version will pit two outstanding performers in the shape of Kenya’s world marathon record-holder Brigid Kosgei and world 1500m and 10,000m champion Sifan Hassan of the Netherlands.

Neither has had an easy preparation for their latest test as they seek to better the world record of 18,517 metres set by Ethiopia’s Dire Tune at the Ostrava Golden Spike meeting in 2008.

Hassan, who failed to finish her race at the Wanda Diamond League meeting in Monaco last month, spent five months in her native Ethiopia, much of it in lockdown, while Kosgei’s normal training routine was also severely curtailed. 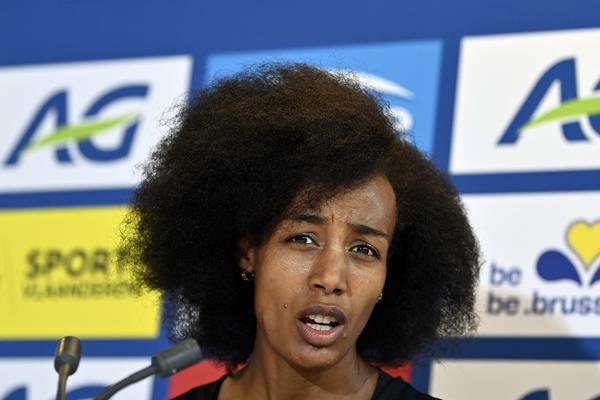 “I spent five months in Ethiopia this year, without my coach,” Hassan said. “I took a break in March. For three months we were scared – we couldn’t even go outside. It was very hard, I didn’t practice at all.

“Seven weeks ago – that is when I started. I ran three weeks ago in Monaco, but that did not go well. This time I am more prepared and in better shape. I think I will manage to run a better time.”

Kosgei said: “My training has been changed because of the pandemic. Since lockdown I ran only with my pacemaker, and sometimes me alone. I did my best there in Kenya. It was not like earlier on where we were with my friends and training partners.

“We were in the training camp in January and February. Then we had the coronavirus pandemic and we just left the camp. I went to my home to stay with my kids up to two months ago. I started to train because I have my London Marathon title to defend.

“When I was in Kenya I was just doing speed work in the field. But I hope to do well tomorrow because I have prepared well. Now I say let me try a half marathon and for tomorrow I want to try my best to look how my body will be in the London Marathon.”

Hassan was enthusiastic about the Wavelight technology that will be available for pacing in the stadium tomorrow, with lights running round the edge of the track

“Personally I am very happy to run with it because I am always unprepared!” she said. “It is good for the athlete to know where they are. Sometimes the coach tells you that you are running this time, you are close to a record, but with the crowd it is sometimes hard to hear. In Monaco last year I didn’t know if I was close to the world record or not. I tried to do my best and suddenly got it. I think this is really fantastic for spectators and athletes. 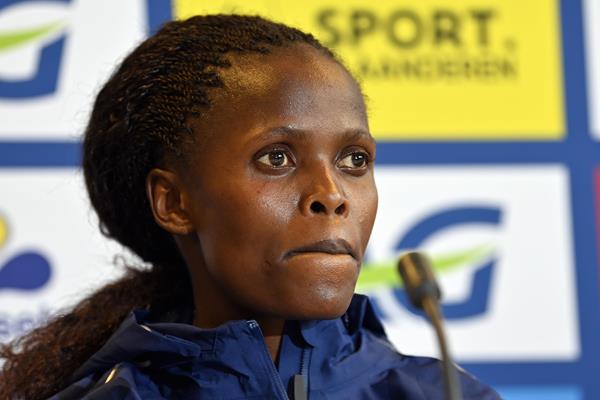 Kosgei commented: “I have never run with this – never experienced such things, because I have never been in the field since I created my marathon career.”

Meanwhile Britain’s world heptathlon champion Katarina Johnson-Thompson is looking forward to competing in the 100m hurdles and high jump – the legs of a proposed triathlon that foundered once home favourite Nafissatou Thiam pulled out with achilles tendon problems.

“I’ve got to thank you guys because this has kept me very motivated in training over last few months,” she said. “I have really needed it.”

Johnson-Thompson, who went back home to Liverpool before the French lockdown affected her at her training base in Montpellier, thus spent three months without her coach.

“I have been able to train, but multi-events are very technical and it has been difficult to keep them up to a certain level. I think my fitness and strength kept the same, but without the facilities in France I have been slowly building back on the technical side.”