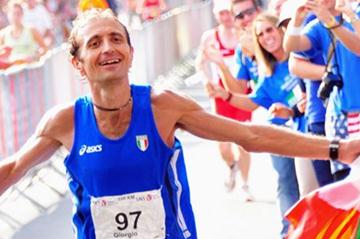 There were 285 athletes from 34 countries who started the championships, a record numbers over its twenty six year history. The race was run on a 10 kilometre loop course in warm conditions with mid 20C temperatures and cloudy at the start with intermittent sunshine in the afternoon.

The men’s division was won by 2008 World champion Giorgio Calcaterra (ITA). He ran a time of 6:27:32 to take top honours. Last year’s bronze medallist and IAU Athlete of the Year 2010, Michael Wardian (USA) moved up the podium to take second place in 6:42:49. His teammate and rookie international runner, Andrew Henshaw took home the bronze in 6:44:35.

In the opening stages, Calcaterra ran stride for stride, with Fanie Matshipa (RSA) until the 40km mark, when he made a decisive move and took the lead alone. Calcaterra’s fast time is not new for him as he has had several sub-6:30 races during his career.

Wardian ran a more conservative race compared to his run last year. He made his move from behind, around the mid-way mark, and he ended with his signature fast and strong finish at the end. Henshaw made his move around the same time as Wardian and held on for a strong finish to maintain his third place finish. Last year’s champion, Shinji Nakadai (JPN) came strong in the second half of the race and finished fifth overall.

In the women’s race, Marina Bychkova (RUS) won the women’s World Championship with a time of 7:27:19. She was followed by the bronze medallist from the 50km World Trophy Final Joanna Zakrzewski (GBR) in 7:41:06. Lindsay Anne van Aswegen (RSA) took the bronze medal in her first international IAU event in 7:42:05.

Bychkova ran a steady pace for the first 50 kilometres. But as the race went on, she got stronger, going past last year’s World champion Ellie Greenwood (GBR) at the mid-way point. In the second half of the race she continued her strong smooth running style and won in an impressive field.

Zakrzewski ran a different race than she did in Assen at the 50km World Trophy Final three weeks back. In Winschoten, she took a more conservative controlled start and worked her way through the field as the race progressed to ultimately finish in second place. Van Aswegen did not feature in the top 5 until about the 80km mark. She made a decisive move at that point to move into the fifth place and then worked her way through the last loop to move into third place.

This race also had a Masters’ component alongside the main event. The Masters’ section was organised in collaboration with the World Masters Athletics. Medals were awarded in 5-year age groups.