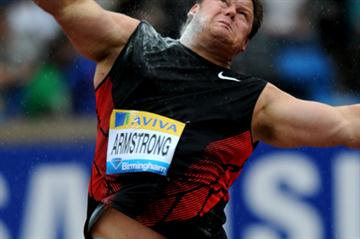 Athletics Canada named a contingent of 32 athletes who will travel to Daegu, Korea, for the 2011 IAAF World Championships. The biggest sporting event of 2011 will feature athletes from over 200 countries converging for nine days of competition on a state of the art Mondo SportFlex Super X track.

The World Championships run from 27 August through 4 September with the Canadian team beginning departures on 14 August for a final preparation camp in Changwon City.

“Korea is our dress rehearsal for London and we are preparing athletes to have their best performances of the year in Daegu.  Our veterans are ready; Armstrong, Felicien, Zelinka and the men’s 4x100m team are tracking for top finishes. The return from injury of Scott Russell in the javelin and Jim Steacy in the hammer, both Olympic finalists in Beijing, adds further depth to the Team,” said Alex Gardiner, World Championship team Head Coach.  He adds, “In September we will analyze the results, define the gaps and set our final plan for the Olympic Games.”

Headlining Canada’s entry is Kamloops, B.C.’s Dylan Armstrong. Armstrong set a new Canadian record of 22.21m at the Canadian Championships in June, a mark that still holds up as the season world leading performance.  He also leads the Samsung Diamond League standings in the Shot Put with 13 points.

Two-time world outdoor medalist Perdita Felicien of Pickering, Ont., is looking for a strong showing at the World Championships as she has her sights firmly set on a podium at next summer’s Olympic Games.  Felicien, the 2003 World champion and 2007 silver medallist, is always a top three threat at major championships.

The men’s 4x100m Relay team is aiming to improve on their fifth place showing from the 2009 World Championships in Berlin. The relay team is coming off a strong camp in Ottawa and will continue to perfect their art at the final preparation camp with their eyes on a top three finish in Korea.

The team will also feature 12 up and coming stars who will line up in their debut world championship.

“Several of our rising stars are ready to challenge for spots in the finals as they get their first taste of competing against the planet’s very best,” added Gardiner.

At the 2009 World Championship, Whitby, Ont.’s Priscilla Lopes-Schliep won silver in the 100m Hurdles. Lopes-Schliep will not compete at Worlds as she is expecting a baby in September; she is planning to come back and compete at the 2012 Olympic Games.

Since the first World Championships in 1980 Canada has won four gold, eight silver and five bronze at Worlds. The best showing came in 1995 in Gothenburg, SWE., where Canada came away with four medals.

Athletics Canada for the IAAF