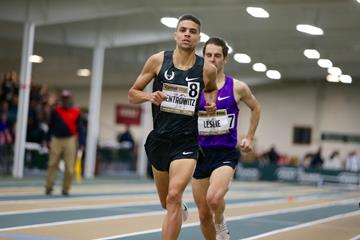 Centrowitz is coming off what was arguably the best season ever produced by a US miler. In March, Centrowitz won the 1500m at the IAAF World Indoor Championships Portland 2016, took the national title at the US Olympic Trials and then prevailed at the Olympic Games in Rio where he became the first athlete from the US in 108 years to the win Olympic 1500m gold. His season’s best for the mile, 3:50.63, was the fastest in the world in 2016.

"I’m looking forward to returning to Boston as the reigning Olympic and world indoor champion," said Centrowitz. "I couldn’t think of a better meet to kick off my 2017 season. The Reggie Lewis Center always has a knowledgeable and enthusiastic crowd for the middle and long distance races."

Stefanidi and Suhr claimed the past two Olympic titles in the pole vault, promising to make that event one of the key highlights of the meeting, this year celebrating its 22nd edition.

Stefanidi cleared a Greek record of 4.90m at the Millrose Games in New York last winter, just one month before taking bronze at the World Indoor Championships. Five months later she capped her season with a 4.85m clearance to win gold in Rio.

Suhr, the 2012 Olympic gold medallist, is a 17-time national champion and owns the world indoor record at 5.02m. In March, she took the world indoor title but disaster struck in Rio where she was hit with a respiratory infection in the days leading up to the Olympic final, and eventually finished seventh. Suhr will be competing in Boston for the tenth time in 11 years.

Two more US middle-distance medallists, Jenny Simpson and Emma Coburn, will feature in the women’s distance medley relay. Simpson and Coburn raced to bronze medals at 1500m and the 3000m steeplechase, respectively, in Rio. They'll be joined by Brenda Martinez, an 1500m semi-finalist in Rio. Martinez, a bronze medallist over 800m at the IAAF World Championships Moscow 2013, anchored a New Balance Track Club quartet to a world indoor best of 10:42.57 in the distance medley relay at this meet's 2015 edition.