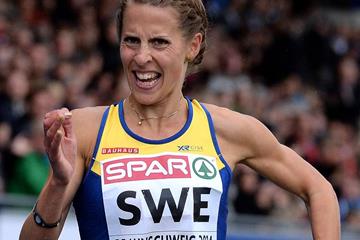 Swedish 3000m steeplechase record-holder Charlotta Fougberg has confirmed that she will compete over the barriers on 21 August at the DN Galan in Stockholm, the 11th meeting of the 2014 IAAF Diamond League series.

Fougberg ran an aggressive steeplechase race last week in Glasgow, which resulted in a Swedish record of 9:23.96, the fastest European time in 2014 so far.

“I have been fortunate to have an amazing season so far and I can't wait for two of the most exciting races that are coming up for me,” said Fougberg.

“The European Championships in Zurich is obviously the main goal, but being invited to run the 3000m steeplechase at DN Galan at the Stockholm Olympic Stadium will be magical. I'm hoping that the stadium will be full which will give me golden wings to carry me to new records and higher rankings. I will do everything in my power to give the fans an exciting race.”

With her positive and confident disposition, the extrovert Fougberg has quickly become a media favourite in Sweden.

Swedish female middle-distance running is improving in many events and world champion Abeba Aregawi has already announced that she will run her specialist distance, the 1500m, at the DN Galan meeting.

Anders Tallgren, DN Galan meeting director, is delighted with the situation. ”It’s fantastic that Swedes are performing so well across the whole range of events," he said. "The European Championships in Zurich will be exciting and the Stockholm stadium is looking forward to welcoming the team home with the first IAAF Diamond League meeting after the championships.”