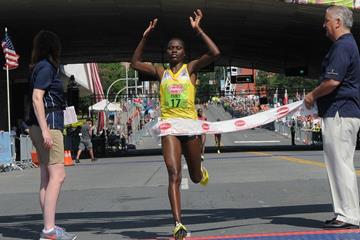 Chebet looking for hat-trick in Albany

The long-standing rivalry between Kenyan and Ethiopian long distance runners will be renewed once again when the 37th annual Freihofer’s Run for Women 5K takes place on Saturday 30 May, after organisers announced their elite field on Wednesday (20).

These two proud running nations are no strangers to New York and both countries have won three titles apiece over the past six years at this prestigious IAAF Silver Label Road Race.

The Kenyan contingent will be led by two-time Freihofer’s champion Emily Chebet, whose victory here in 2010 (15:12) remains the fastest time ever recorded on the event’s former Madison Avenue course.

“Emily and her team mates will have a new course to contend with this year," said Event Director George Regan, explaining that a two-year beautification project at the Empire State Plaza in Albany has led organisers to shift the course’s start and finish. “It will be interesting to see how our elite athletes adjust their racing tactics to the new course.”

Joining Chebet, and 4000 women from more than 25 USA states and 20 nations, will be her compatriot Isabella Ochichi, the 2004 Olympic 5000m silver medallist.

Other Kenyans in the field include Ann Wanjiru, Monicah Wanjuhi Ngige and Salome Kosgei.

Leading the Ethiopian challenge will be Buze Diriba, the 2012 world junior 5000m champion, and Ruti Aga, who finished one place behind her in Barcelona and who has gone on to be a successful cross-country and road runner.

They will be ably supported by veterans Meskerem Assefa and Amane Gobena, the latter a runner up at last month’s Paris Marathon and winner of the 2014 Los Angeles and Istanbul Marathons.

Burundi’s US-based Diane Nukuri is starting to find her groove this year, as evidenced by her finishing third at the Prague Half Marathon and 13th place finish at the London Marathon in a national record of 2:27.50.

Eritrea’s Nazret Weldu can also not be overlooked either. Her recent resume includes winning at the 2015 Trier Silvesterlauf 5K and coming home a good 11th place at the 2015 IAAF World Cross Country Championships.

Also in this year’s strong Freihofer’s field will be a group of talented US runners led by local favourite Megan Hogan, whose sixth-place finish here in 2014 made her the top US finisher last year.