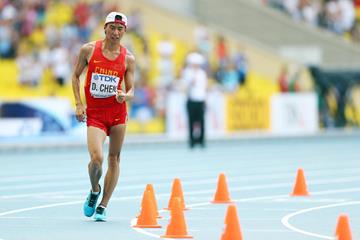 Hosts China have assembled 73 athletes on their team for the IAAF World Championships, Beijing 2015, their largest ever squad at a world championships, spearheaded by a group of elite race walkers including Olympic champion Chen Ding and world record-holder Liu Hong.

In Moscow two years ago, the Chinese team finished 22nd on the placing table with one silver and three bronze medals. All the four medallists there, Chen, Liu, Gong Lijiao and Zhang Wenxiu, have once again been included in the team for Beijing.

It will be the second time for the 23-year-old Chen to compete at the World Championships after his second-place finish in Moscow.

Wang’s winning time of 1:18:00 in La Coruna in June is the fourth-fastest so far in what has been a stellar season for fast times in this event. After getting disqualified in Moscow two years ago, Wang has already set his sights on getting on the podiumin Beijing.

Liu will be the top favourite in women’s 20km race walk. The 28-year-old set a world record of 1:24:38 in La Coruna back in June to demonstrate her solid form and is desperate to win a long-awaited gold medal on her home soil after five successive top-four finishes and three medals at global championships.

After bronze medals in 2009 and 2013, the 26-year-old is keen to upgrade the colour of the medal and the withdrawal of defending champion Valerie Adams has certainly made it more possible.

Gong has thrown beyond 20 metres three times this year and is second on the 2015 world list, behind Germany’s Christina Schwanitz.

High jumper Zhang Guowei is another medal hope for the hosts.

The 24-year-old has progressed significantly this year, adding four centimetres to his personal best and improving to 2.38m. He is only one centimetre away from the long-standing national record, and former world record, of 2.39m set by 1983 world bronze medallist Zhu Jianhua in 1984.

Although he will be competing against five jumpers with bests above 2.40m in Beijing, the ambitious Zhang is eager to repeat his success at the IAAF Diamond League meeting in Oslo when he upset the favourites to claim the title at 2.36m.

Although his build-up to the World Championships has been marred by a series of injuries and illness, with his season's best being 8.26m, the Beijing native has shrugged off all the health problems since the start of August and is ready to give his all in the Bird’s Nest stadium.

The Chinese team also includes pole vaulter Li Ling, who took a surprise victory at the 2014 IAAF Continental Cup, and the country’s star sprinter Su Bingtian, who dipped under the 10-second barrier to improve the 100m national record to 9.99 in May.