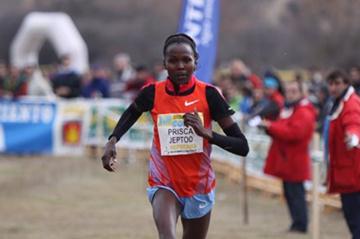 Chepkok and Jeptoo unopposed at Soria

The Kenyan pair of Vincent Kiprop Chepkok and Priscah Jeptoo confirmed their roles as hot favourites to capture convincing victories at the 18th ‘Cross Internacional de Soria’ today (20) in much warmer temperatures than usual.

This afternoon’s meeting was the second leg of the current IAAF Cross Country Permit series 2011/2012.

The men’s 10km contest witnessed a frantic early pace set by Eritrea’s Adhanom Abraha, 18th at this year’s World Cross Country Championships in Punta Umbría. The 34-year-old opened a sizeable gap over Chepkok over the first kilometre but the reigning World XC bronze medallist Kenyan remained cautious and didn’t go out in pursuit of Abraha.

By the 3km point, which was passed in 8:46 Chepkok had already caught Abraha and both were 50m ahead the tandem of Spain’s current European XC silver medallist Ayad Lamdassem and Uganda’s Simon Ayeko. While the leaders’ rhythm seemed to slow down for a while, Lamdassem left the Ugandan behind and joined the head with 13:30m on the clock.

The halfway point was reached in 14:47 and the picture was a front-running Abraha leading from Chepkok and Lamdassem. The decisive movement came at the 7.2km when Chepkok put his foot firmly on the gas to open a 10-second margin on Abraha and Lamdassem in a matter of a few strides.

Once it became clear that Chepkok would succeed, the attention turned on the fight for the silver position. Some 400m left it was the Spaniard who unleashed a strong kick to get ride of Abraha. Lamdassem even got close to Chepkok but once the Kenyan realised his win might be in jeopardize he changed his pace very easily to romp home in 29:48 for Lamdassem’s 29:53.

While Abraha completed the podium, Spain’s Javier Guerra overtook a fading Ayeko to finish fourth and secure a berth in the Spanish team for next month’s European Championships in Velenje.

Chepkok was quoted as saying:  “I’m really satisfied since this is my first win at an IAAF permit. I didn’t panic at all when the Eritrean guy pulled away in the very beginning because I was sure I would be able to catch him and win.”?

Jeptoo on a class of her own - Women’s race

There was no surprise in the previous women’s race held over 8km and the reigning World Marathon silver medallist Priscah Jeptoo recorded a massive 44 seconds win to stamp her authority over the rest of the field headed by Uganda’s Rebecca Cheptegei.

The contest kicked off very conservatively and the early leader was Spain’s Alba García. Shortly afterwards Jeptoo and Cheptegei took command of the race but their pace didn’t seem particularly fast and still seven women stayed at the front by halfway.

It was with the clock reading 15:30 that the African athletes broke away from the rest but the two-horse battle was to be short-lived as the 27-year-old Jeptoo launched a devastating attack some 2.6km from tape. From then on the Kenyan largely increased her leadership and the gap with Cheptegei rose to over 200m over the final lap.

Jeptoo’s final advantage on the Ugandan was  17 seconds while Spain’s Estela Navascués – she beat her compatriot Marta Domínguez in Atapuerca last Sunday in Atapuerca – managed the minor spot on the podium.

The winner declared: “Prior to this year I haven’t race on cross country races but I’m enjoying the experience very much; my third place in Atapuerca and today’s success are a confident booster for me thinking of my next outings; honestly, it hasn’t been a difficult victory,” confessed Jeptoo.