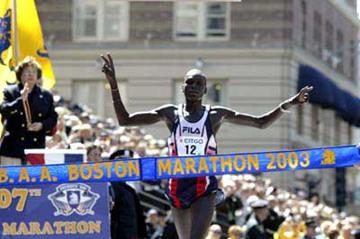 Double Boston marathon champion Robert Kipkoech Cheruiyot won for the first time the Giro di Castelbuono, the Sicilian race held yesterday (26 Jul) which is one of the oldest European race, as it started in 1912 and this year's was the 81st edition.

In the town near Palermo, in a very hot evening, the Kenyan closed with a time of 35:15, far from the course record of 33:46, set by Martin Lel two years ago.

Cheruiyot, who when winning the last Boston marathon set also the course record with a stunning 2:07:14, showed one more time to be very strong in hilly courses. In Castelbuono athletes have to cover a lap of 1.1km for 10 times, with an uphill stretch of about 300m. After halfway, Cheruiyot increased his lead in that part at each lap, while other rivals caught him again in the following downhill stretch.

During the 6th lap just three remained in the leading pack: Cheruiyot, Sanga and Gharib. Cheruiyot made the decisive move during the 9th lap's climbing and began the last lap with a 5 second lead. His win was not as surprising as the 2nd place of Sanga, who already was a protagonist some days ago in Porto Sant'Elpidio, where he closed in 3rd in the race won by Olympic champion Stefano Baldini.

"Tonight it was really hot," Cheruiyot said after the race, "and the course was hard. I couldn't run faster than I did."

With no main championships this summer, Gharib was not at his top. He had already planned some short races in Italy for the next weeks: next Sunday he will run 10km in Bianco (Calabria), then on 13 August 18km in Miglianico (Abruzzo).

Swiss Viktor Rothlin took a good 4th place, showing to be in shape for the European marathon in Gothenburg. On the contrary, out of shape is Sammy Korir, the fastest this year on the marathon (2:06:38 in Rotterdam), who closed just in 10th.

Alberto Zorzi for the IAAF