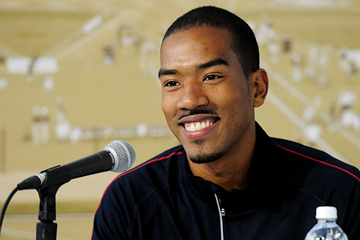 With just 10 days to go until the beginning of the 2016 IAAF Diamond League, world and Olympic triple jump champion Christian Taylor spoke to the media via teleconference on Tuesday (26).

The 25-year-old US athlete is one of a number of stars who will flock to Doha for the first meeting of the season on May 6, with Taylor’s training partner Dafne Schippers of the Netherlands and close rival Teddy Tamgho of France among those set to compete.

Last year in Doha, the triple jump offered up a duel for the ages, with Taylor jumping a personal best of 18.04m, but being denied on the night by Cuba’s Pedro Pablo Pichardo, who jumped 18.06m. However Taylor gained revenge at the IAAF World Championships Beijing 2015, regaining his world title when soaring out to 18.21m, a jump which moved him to second on the world all-time list behind Jonathan Edwards of Great Britain.

Ahead of his return to Doha, Taylor discussed his plans for the year, the benefits of training with the world’s best, and why a renewed emphasis on speed may help him surpass the world record. Here are some of the highlights.

How has your training been going and were you pleased with your first competition of the year [17.11m in Nassau]?

It's Olympic year again, and that meet in the Bahamas was a great way to get the ball rolling. Chris Brown and I got together and made a great triple jump field. It was very difficult not to treat it like a holiday, because our hotel was right on the beach. It was difficult to stay focused, but preparation has been wonderful. The key is to stay healthy. A couple of people have jumped 16.80, 16.90, so I said if I can go over 17 metres, it would be a solid way to start the year. To come out with a 17.11, I'm very pleased with that. It was nice to shake off the rust. The bar was set very high with Doha last year, going over 18 metres, so now I know 17 metres isn't going to cut it.

Last year’s triple jump in Doha was an unforgettable event. Do you think history could repeat itself and we could have another great competition next week?

I like to believe every time we step on the track it’s going to be something special. Last year I was trying to make it the year of the jumps, and Pichardo and I did a wonderful job. It was very unfortunate that Teddy [Tamgho] went down [injured] in Doha, but that’s part of the sport. When you’re pushing your body to the limit, anything can happen. The great thing is he’s back, and that’s really exciting. We can all step on the track together.

I don’t really know what Pichardo is doing, but he’s a young guy, and when he shows up, it’s going to be something special. I enjoy the competition, rising to the occasion. I'm really hoping Pichardo makes an appearance there too, but as of now I believe it will be myself and Teddy as the big headliners. Teddy has shown he’s back indoors. [Note: Tamgho returned from injury by jumping 16.98m in Aubiere in February]. We were both down in Sarasota, Florida at the IMG Academy the last few weeks and got to do some training. To see him running around down here, it’s very exciting for me.

I don’t like to put distances out there, but it’s possible to have another 18-metre showing. I like to just go and compete, surprise myself and the fans, I don’t want to leave it to the last jump, but if needs be, that’s what I’m ready for.

Hopefully Teddy is ready to bring a show and I’m ready to challenge him, and everyone else in the field too. Let’s bring eyes to the triple jump. We work so hard to make the triple jump a premier event, so why not use the spotlight and run with it.

Ever since you turned professional in 2011, you’ve been prolific on the IAAF Diamond League circuit and always used it to prepare for major championships. How important will it be for you this year leading up to the Olympics?

I’m so grateful for a league like this, a circuit like this. It brings together all the top athletes. Everyone who is in the IAAF Diamond League are the people who are in world or Olympic finals. For me, mentally, it helped me get my head around belonging. If I can compete with these guys week after week, then I know what will come in August.

I know the performances will be different – obviously different things happen at championships – but I know I can compete with the best. I’m so grateful for the Diamond League because it shows me where I stand with the rest of the world. I’ve been very fortunate the last four years to be part of it and to win the overall competition. If I’m able to compete with the best in the world to that point, then hopefully my confidence will be through the roof. Hopefully I’ll be jumping 18 metres again by this point of the season, then take that energy to the [US Olympic] Trials and prepare myself for Rio.

Is there anything you have done differently in training this year?

The biggest difference is the speed. I feel my strength as I’m getting older is speed. I’ve always been very young in the event, and have been able to get away with a lot of imperfections. The jumps weren’t always the prettiest, but because I was one of the faster jumpers I was able to pull through. Now that the strength is catching up with it, I can continue to challenge myself to get faster and faster.

We’ve incorporated a lot more speed work this year. I was always a big fan of doing 350s, 250s, things that were very comfortable for me. It was mentally testing, but not giving me what I really needed to maximise my 40 metres on the runway. Now I’ve been doing a lot of fast explosion runs and lifts. It’s a 100-metre, 200-metre mindset, and hopefully I can use that turnover and training on the runway. It’s about being the fastest athlete I can be. At the end of the day, speed wins, so the faster you are the further you will jump.

You spoke a lot last year about adjusting to your new take-off leg, and now that you’ve had a full year to do it, do you feel a lot more comfortable? How much has changed since the start of last year?

The first year of changing legs [2014] was a little rocky, a little rough, but I was grateful to have that off-year. To be able to jump further off the new leg was a huge confidence booster. To be able to say I almost jumped 18 metres off both legs is great.

My weak leg is no longer my off leg; now it’s truly my best leg. Getting back into training is weird, because now jumping off my [left] leg – which is my dominant leg – is off and feels weird. My coach and I sit there and laugh, wondering how I can jump for 10 years off one leg, then jump a year off the other one, and lose that balance, co-ordination. The confidence is definitely there with the new jumping leg. It’s very natural now.

As a member of Rana Reider’s group, you train with athletes from all over the world, including Dafne Schippers. How does it help having such a multi-national group training together and how do you benefit from each other?

I don’t train with Dafne too much as she’s on the girls’ side and focuses on sprints, but Shara Proctor and I train a lot together because we’re the only jumpers. Having Rana being with the Dutch federation, and training with guys like Churandy Martina, Dafne, that’s pretty cool.

For this year, it’s about fine tuning the speed aspect. To be training with someone who’s running 21 seconds [for 200m], Dafne is just an incredible athlete. I hate to say it, but because of pride, every run I do, everything I do around her, I can hustle, no matter what.

Having someone like that changes your training mentality. Sometimes with the guys, you say: ‘this guy has run nine seconds [for 100m] or 19 seconds [for 200m] so it’s expected', but no matter what Dafne runs, I cannot let her beat me. It adds a lot more fun to it. It takes all that pressure off jumping, because it becomes about my pride, my ego. It’s phenomenal to be around world-class athetes day in, day out, and it’s going to really benefit me in the long run.