28 October 2011Cuba’s Omar Cisneros joined the sub 48-second club to achieve his biggest career win in the 400m Hurdles, while Bahamas’ Donald Thomas soared to 2.32m to take the High Jump gold on the fifth day (27) of the athletics tournament of the 16th Pan American Games.

One day after running his best time outside Cuba (48.99), Cisneros was sixth off the blocks but recovered his pace and entered the home straight in the lead. He went on to win in 47.99 to set a new national and Pan American Games record.

“I am very proud to have broken the record. I came here with the aim of winning a medal of any color. The track will only tell how far I can go,” said an ecstatic Cisneros, who erased his national record of 48.21, set in 2010, and the Games standard of 48.19, set by Dominican Republic’s Felix Sanchez in 2003.

He joined his countryman Frank Montieh (1983) as the only Cuban men to have clinched the Pan Am gold in the event. Aided by Guadalajara’s 1558m altitude, the 21-year old also moved to the fifth position on the 2011 world lists.

In his fourth continental Games, Sanchez finished third in 48.85, behind Jamaica’s Isa Phillips (48.82). “It was bronze, but I wanted gold and almost got silver,” said the 2004 Olympic champion, who fell after crossing the finish line and could have hurt his right arm.

Five men dipped under 50 seconds, including Winder Cuevas of the Dominican Republic, who finished a respectable fourth in a personal best of 49.20.

Thomas was pushed in a close High Jump contest by Diego Ferrin. He was trailing the Ecuadorian, who cleared a national record of 2.30m on his first attempt.

Thomas, the 2007 World champion, responded with 2.32m on his second attempt to secure Bahamas` first gold in any sport in Guadalajara and improve his silver from Rio 2007. Ferrin became the fourth South American athlete in history to join the 2.30m club, while Cuba’s defending champion Victor Moya settled for third with 2.26m.

Hours after sustaining a muscular contraction anchoring the Cuban 4x100m team, Roberto Skyers was the surprising winner in the men’s 200m, the most important accomplishment for the 19-year old, who edged out Jamaican Lansford Spence in the photo finish, with only one hundredth of a second separating them (20.37 and 20.38). Brazil’s Daegu finalist Bruno de Barros could not hold his lead in the final meters and finished third in 20.45.

“I knew he was a strong competitor, but managed to beat him on the line,” said Skyers, who will turn 20 next month.

Adriana Munoz and Marisol Romero collected their second victories at the Telmex Stadium. In a slow 1500m final, the Cuban prevailed in the sprint finish to add to the 800m gold as she did in 2003.

Cuba’s Misleydis González had a consistent series over 18.50m to successfully defend her Shot Put crown in 18.57m, followed by Trinidad and Tobago’s Daegu finalist Cleopatra Borel (18.46m) and Michele Carter (18.09m) of the USA.

USA’s bagged its third gold thanks to Alicia Deshasier in the Javelin (58.01m).

Robles the focus of 12 Friday finals

Elsewhere, Olympic and Pan American champion Dayron Robles led the qualifiers to the 110m Hurdlers final with 13.22 in the second semifinal. His 20-year countryman Orlando Ortega took the first one in 13.33, a massive personal best by over two tenths of a second.

Twelve finals will be contested on Day 6 of athletics, the last one at the Telmex Stadium, featuring several World and Olympic medallists.

Top names includes Yarelis Barrios in the women’s Discus, Guillermo Martinez in the Javelin, Daegu runner-up Lazaro Borges vs. defending champion Fabio da Silva in the men’s Pole Vault, as well as Robles defending his crown in the 110m Hurdles, all from Cuba.

A much awaited duel between two-time world and Pan Am defending champion Yargelis Savigne and Daegu bronze medallist Caterine Ibarguen of Colombia is expected to highlight the women’s Triple Jump contest.

Other finals will be the men’s 800m, both 3000m Steeplechase races and all relays. 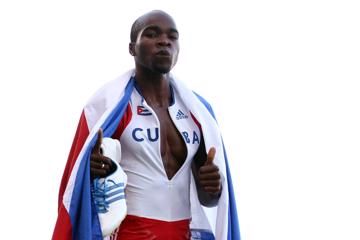