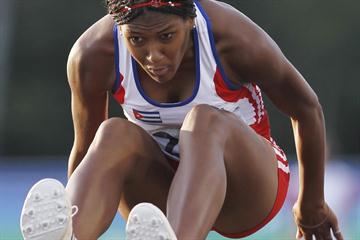 After being fourth at last year’s World Youth Championships in Bressanone, Italy, missing out on a medal by three centimeters, Cuba’s Irisdaymi Herrera made no mistake on Friday at the World Juniors.

Twelve months and an amazing 0.39m improvement later she is the owner of a brand new IAAF World Junior Championships gold medal after a dominant performance as she took the lead from the second round and never let up.

With only one attempt under the 6 metres mark for the entire competition, Irisdaymi showed the depth and strength of the Cuban jumping.

After being tied for second after the first round (6.01m), she took over the lead in the second round with a 6.30m leap that would be good for the gold before letting it all out with a personal best 6.41m in the fifth round.

Having already secured the gold the 18-year-old went after an even bigger jump on her final attempt but the hard work from the early rounds had taken their toll and she managed just a 6.17m effort before jumping into the arms of her coaches and managers and taking her well deserved lap of honour with the Cuban flag.

It was Cuba's third gold medal of these championships after they claimed the women's Triple Jump and women's Discus Throw titles.

Paul Reid for the IAAF