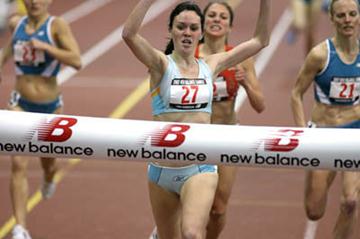 A record field of more than 1000 entrants and a course-record run by Mary Cullen (IRL / Providence, RI) highlighted the 19th edition of the Mayor's Cup Cross Country Races today (26).

Overnight rains didn't discourage anyone from making the trip to Boston's Franklin Park, site of the 1992 World Cross Country Championships.

Yet despite running faster than she had in either of her victories, Ayilu found herself chasing former Providence College star Mary Cullen (IRL / Providence, RI) from the gun. Cullen, the runner-up here in 2005, led the pack through one mile in a brisk 5:07, and by two miles she was alone in front. By the time she broke the finish tape in 16:08, Cullen wasn't just 28 seconds ahead of runner-up Ayilu, she was also 14 seconds under the meet and course record set by Kathy Franey in 1997.

Cullen is preparing for the European Cross Country Championships in Belgium, where she will represent her native Ireland.

In the Men's Championship 8K a large pack, which included 2006 champ Stephen Chemlany (KEN / Westchester, NY), passed through one mile in 4:35 and two miles in 9:35. By four miles, reached in 19:35, Jacob Korir (KEN / Richmond, KY) had emerged at the front, and shortly after that he surged away from Sean Burris, Ben Rosario, and the rest of the lead group.

Korir, a three-time NCAA All-American during his recently-completed senior year at Eastern Kentucky University (sixth in cross country in 2007 and third at 5,000m and fourth at 10,000m in 2008), was unopposed over the closing mile of the race, breaking the tape in 23:54, 10 seconds ahead of runner-up Burris.

Marc Chalufour for the IAAF