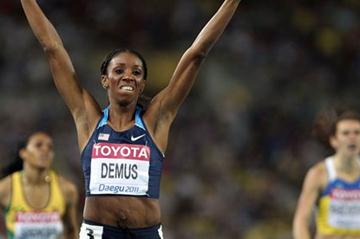 Daegu, KoreaThe U.S. collected three of the six titles on offer on Day Six of the IAAF World Championships Daegu 2011, nearly doubling their overall gold medal haul. And it all happened in just over 30 minutes time.

The first came courtesy of Jesse Williams in the High Jump, who arrived in Daegu as the World leader and will leave as World champion. Producing the finest competition of his career, the 27-year-old topped 2.35m and didn’t miss until his first attempt at 2.37m to take the first gold in the event for the U.S. in 20 years. Prior to the start, Williams dedicated the competition to his father who suffered a stroke in the Philippines six weeks ago and remains hospitalised. We certainly hope his father comes through the same way his son did tonight.

Aleksey Dmitrik defended Russian honour to take silver at the same height, but needed second attempts at 2.29m, 2.32m and 2.35. Bahamian Trevor Barry cleared a PB 2.32m on his first attempt to secure the bronze.

Simpson shocker in the 1500m

The next gold strike came less than 13 minutes later in what was certainly the surprise of the night when Jenny Barringer Simpson kicked past Spaniard Natalie Rodriguez to claim the first 1500m victory for the U.S. since Mary Decker took the title at the inaugural edition of the Championships in 1983. That was three years before Simpson, a finalist in this event two years ago, was born. The shock was evident even to the winner herself, who initially looked more dazed and confused than joyous and thrilled.

A moderate pace in the early going set this one up for a blanket finish, with Barringer positioning herself nicely off the final turn before kicking home in 4:05.40. Behind her Hannah England made up even more ground before crossing the line second after following the American past Rodriguez, who took the bronze.

And 16 minutes after that, Lashinda Demus produced the race of her lifetime to finally clinch gold in the 400m Hurdles. The runner-up in both 2005 and 2009, Demus sizzled to a 52.47 national record, a personal best by 0.16 seconds to move up two notches on the all-time list to No. 3. The 28-year-old mother of twin sons timed her rhythm perfectly, refusing to panic when World leader Kaliese Spencer took a narrow lead early on and when defending champion Melaine Walker carried a narrow lead into the homestretch. Demus simply forged on through the straight, with Walker eventually taking second in 52.73. Russian Natalya Antyukh was more than a second back to take bronze.

The men’s 400m Hurdles final came down the wire, too. South African L.J. van Zyl carried a narrow lead off the eighth hurdle and into the home stretch. Javier Culson made up the difference and held the lead off the final hurdle. Then, step-by-step David Greene made up ground to take the win in 48.26, Great Britain’s first gold of the Championships, and similarly to Williams’ victory in the High Jump, the first by a Briton in the event since Tokyo 1991. Culson was second for the second straight Championships in 48.44, with van Zyl third.

Ukraine’s Olha Saladuha set the early marker in the women’s Triple Jump, a first round 14.94m leap which would prove enough for the Ukrainian to take the gold. The 28-year-old, who took last year’s European title, didn’t come close to that mark again, and must have felt a bit uneasy during the fifth round when her supremacy was tested the hardest. World indoor champion Olga Rypakova reached 14.89m to secure silver and Caterine Ibarguen, ending her breakout season on a high, jumped 14.84m to take the bronze, the second medal of these championships for Colombia at the second ever in the history of the World Championships.

Two-time defending champion Yargeris Savigne was never in the hunt, reaching just 14.43 in the first round to finish a distant sixth.

Move over Blanka Vlasic, I think you’ve just met your match on the stadium dance floor. After cruising to his decisive 8:14.85 victory in the 3000m Steeplechase – his second straight – Kenyan Ezekiel Kemboi introduced onto the world a dance routine that will likely inspire a new craze in the clubs of Nairobi. The celebration actually began some 40 metres before the finish when with victory assured, the 29-year-old ran from lane two to seven, waving at the crowd as he passed.

The battle behind was close, with Frenchman Mahiedine Mekhissi-Benabbad nearly running down Brimin Kipruto in the final 30 metres, but coming up just a scant .04 behind the Kenyan’s 8:16.05.

A pair of tactical races in the men's 1500m semis saw the departure of defending champion Yusuf Saad Kamel, Kenyan No. 3 Daniel Kipchirchir Komen and top Moroccan gun Amine Laalou, and also witnessed some gutsy running from young American Matt Centrowitz Jr., the winner of the first heat. Olympic champion Asbel Kiprop was the quickest as the winner in the faster second heat in 3:36.75, but no real favourite emerged. This is turning into a toss up similar to the women's final contested earlier tonight.

There were no nig name casualties in men’s Shot Put qualifying this morning, but there was a surprise leader: 21-year-old German David Storl threw 21.50m, adding a whopping 45cm to his previous personal best. Said the former World Youth and World Junior champion: "I really hope that I am not one of these guys that do too well in qualification and then in the final they lose."

Similarly in the women's Javelin, no medal contenders were left out of tomorrow's final, with Germany's Christina Obergföll beating the morning heat with a 68.76m effort, her second farthest throw of the season.

Twelve women managed the 1.95m automatic qualifier in the women’s High Jump, setting up a final with Russia’s world leader Anna Chicherova, and Croatia’s two-time defending champion Blanka Vlasic, who is competing with an injury.

Elsewhere, Mo Farah and Imane Merga, the second and third place finishers in the 10,000m last weekend, were among those to move on to Sunday’s 5000m final. The fastest on the morning was 36-year-old Bernard Lagat, the 2007 champion and runner-up two years ago.

Having competed sparingly this season, defending Long Jump champion Dwight Phillips was somewhat of a mystery man arriving in Daegu. He led all qualifiers with an 8.32m leap, indicating that he has arrived ready to collect a fourth title. Deokhyeon Kim (8.02m) became Korea’s first qualifier for a final at these championships.

No surprises either in the first round of the women’s 800m, with 2007 champion Janeth Jepkosgei the fastest of the morning with 1:59.36. Three others dipped under two minutes while the Berlin 2009 podium trio - Caster Semenya and Jenny Meadows along with Jepkosgei - moved on to tomorrow evening's semis.

The highlight in men’s 4x400m Relay came in the first of two heats, where the U.S. lead two others under the three-minute barrier, in first in World Championships qualifying. 400m silver medallist LaShawn Merritt anchored the quartet to a 2:58.82 run, ahead of Jamaica (2:59.13) and South Africa. The latter, led off by 400m semi-finalist Oscar Pistorius, clocked a national record 2:59.21.