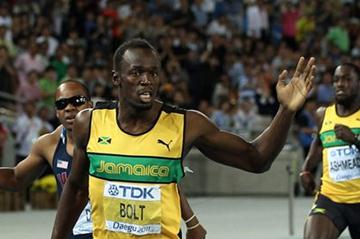 Daegu, KoreaHistorical jaw-dropping displays by Usain Bolt and Sally Pearson were the standout performances on a massively entertaining Day Eight at the IAAF World Championships Daegu 2011.

And stand out they did, providing arguably the most entertaining 20 minutes of track and field action in recent years. Indeed, only Bolt’s evening-capping 19.40 sizzler – the fourth fastest dash of all-time - to defend his title in the 200m could have outdone the nearly flawless display of hurdling Pearson produced just minutes earlier. On fire from the gun, the 24-year-old Australian exploded to a 12.28 run in the 100m Hurdles, the fastest performance in nearly two decades. The near-capacity crowd at Daegu Stadium couldn’t have asked for much more, and stayed on to revel in the achievements of two of the sports biggest stars far after the action ended.

Bolt comes through in a big way

After his false start disqualification in Sunday’s 100m, Bolt was the centre of the attention in this city of 2.5 million How would he bounce back? With a performance quite similar to those which elevated the 25-year-old Jamaican to international superstardom.

Coming off the turn with a marginal lead, he blasted away from American Walter Dix as they entered the homestretch and didn’t slow considerably until he crossed the line in 19.40, a time that’s been surpassed on only three occasions – twice by him.

Behind him, Dix clocked 19.70, his second fastest performance ever to nab his second silver medal at these Championships while the biggest surprise was bronze medallist Christophe Lemaitre of France, who knocked more than three-tenths of a second from his previous best, landing at 19.80. The Frenchman is now the second fastest European of all-time, and No. 15 all-time. And he’s barely 21.

Pearson meanwhile, made her intentions clear in the semi-finals, when she scorched to an Oceania Area record of 12.36 to move all the way up to equal No. 5 all-time. Could she reproduce that in the final? It took her 12.28 seconds to answer that question. Her confident rhythm, cadence and power were a sight to behold as she hurdled to the finish, leaving a strong field well back in her wake.

Americans Danielle Caruthers and Dawn Harper were virtually inseparable at 12.47 for the remaining two medals, with the no given to the former. They were personal bests for both and quick enough to have captured gold at half he previous editions of the World Championships.

The women’s High Jump went according to the pre-meet play book, but it was much closer than anyone – including the main protagonists, would have predicted.

World leader Anna Chicherova of Russia was clearly the class of the field, conquering each height from the opening 1.89m through to 2.03m with her first attempt, a record that would secure her first gold at a global championships outdoors. Croatia’s twice defending champion Blanka Vlasic, who carried an injury and no expectations to Daegu, also cleared 2.03m, albeit needing second tries at 2.00m and 2.03m. 2.05m was perhaps a centimetre too high for both this evening, with Vlasic coming the closest.

Kenya finally landed that elusive 1500m gold, courtesy of Olympic champion Asbel Kiprop. After a moderately run pair of opening laps, the 22-year-old, at time criticised for his lack of tactical savvy, moved to the front with about 700 metres to go. When passing through the back stretch for the final time, he opened up a slight lead with only compatriot Silas Kiplagat for company. Kiprop powered on through the homestretch en route to his 3:35.69 win, more than two-tenths of a second ahead of world leader Kiplagat.

The bronze was a pleasant surprise for the U.S., taken by 21-year-old university student Matthew Centrowitz Jr., who outclassed and outmaneuvered several more experienced professionals to round out the podium. With two smart gutsy runs – in the semis and tonight’s finals – he’ll be one to keep an eye on.

On the eve of the Championships, defending champion Andreas Thorkildsen said that the only strategy in the Javelin Throw is to throw far and do it early. “That usually works pretty well,” he noted. That’s precisely what Matthias De Zordo, the European silver medallist last year, did, and it worked pretty well, too.

The 23-year-old nailed an 86.27m season’s best in the opening round, a throw that remained well out of reach for the remainder of  pleasant and relatively still evening to secure the third Germany victory in the four throws events.

Thorkildsen, the two-time Olympic champion, experienced a rare off-night in a major competition, but did manage to reach 84.78 in round four to take silver. Cuban Guillermo Martinez, the surprise runner-up two years ago, finished third this time around.

The women’s 4x400m produced a solid display from the U.S. quartet, thanks to a 49.30 opening leg by Sanya Richards-Ross, forcing Jamaica and Russia into a game of catch-up they simply couldn’t win. Allyson Felix, the 400m silver medallist and 200m bronze medallist, extended it before Jessica Beard and Francena McCorory brought it home with a world-leading 3:18.09. Jamaican anchor Shericka Williams had little trouble holding off Russia’s Anastasiya Kapachinskaya to bring her team to the line in 3:18.71, a national record.

The host nation captured it’s first two medals of Daegu 2011, when Byung-hoon Yoo and Dong-ho Jung finished second and third in the T53 Wheelchair 400m, clocking 50.69 and 50.76, respectively. Australia’s Richard Colman was clearly the class of the field, cruising to a 49.36 performance.