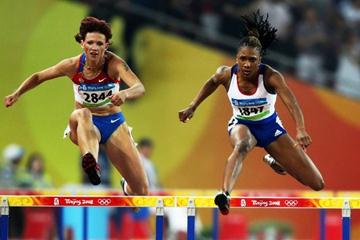 Danvers, clocked a personal best 53.84 to finish third in Beijing in August.  The performance christened a long comeback for Danvers, now the mother of a 4-year-old son Jaden Smith. It’s a journey that will culminate with a bid for a gold medal when her hometown of London plays host to the 2012 Olympic Games.

Danvers will be 34, the same age of compatriot Kelly Holmes when she won the 800m and 1,500m in the 2004 Athens Olympics. Danvers called Holmes an inspiration for her Olympics aspirations.

“You can harp all you want about ages but she won two medals,” Danvers said. “All I want is to get one. She was really supportive of me and my season and even when things were going badly.’’

Career at crossroads in 2004

Danvers, who finished eighth in the 2000 Sydney Olympics, thought her chance to medal would be in Athens in 2004 after clocking a then PB of 54.02 in 2003 but those aspirations were dashed when she discovered she was pregnant.

“I was frustrated and devastated. I was in pretty damn good shape and it was difficult at that point to make a left turn. I wanted to be in the Olympics and had trained for so many years for it. It doesn’t come around very often and neither does having a child. You may never be able to conceive again.”

Danvers and her husband and coach Darrell Smith ultimately decided to shelve the 2004 season, shifting their focus from the Olympics to becoming parents. “Once the decision was made, it was a weight off my shoulders.”

Seven months after giving birth to her son, Danvers finished fifth in the 2005 national championships, in 2006, Danvers won the silver medal in the Commonwealth Games, and the following year at the World Championships, Danvers placed eighth in the Osaka final.

“Progressively, I got better each year. I was pleasantly surprised to medal in Beijing but it wasn’t a complete shock because I had put in the training over the years.”

Danvers’ bronze-medal performance in Beijing was her first PB in the event since 2003. It was hardly indicative of her fitness leading up to the Olympics in a season slowed by Achilles tendon and hamstring injuries and a virus.

Danvers had only four races before the Olympics gaining more attention for her tennis skirt uniforms rather than her times, and she was forced to pull out of meets on the European circuit after footing the plane fare to the competitions at her own expense.

“I was just hoping to get the money back and not finish the season with a negative bank account.”

In Beijing, Danvers’ confidence was boosted as she won her first-round heat and placed second in her semi-final to reach the final with the four fastest time. “Whenever you see the heat sheets, you can never feel comfortable. I thought more about staying in control and executing. I had nothing to lose and nobody expected anything anyways. I had the opportunity to stay relaxed.”

Once in the final, Danvers was optimistic about her prospects to medal running out of the seventh lane. “I thought specifically about keeping the same mind set in the other two rounds. I really wasn’t thinking about running the perfect race. I went out and told myself that you are here for a reason and go and give it to my best.”

Danvers has been bombarded by public appearances since the Olympics. The London Borough of Lewisham held a reception in her honour in September, and in October, Danvers was honoured at the halftime of a USC football game with Allyson Felix and other Beijing Olympians. She also participated in the Olympic Heroes Parade in London and met the Queen at a reception at Buckingham Palace.

Much of her time has been spent giving motivational speeches at schools. “I really love to encourage the next generation to be great people.”

Danvers has also authored a motivational book “Keep Ya Peckah Up: Your Guide to Unleashing Your Greatness.”

The book was inspired while writing notes to prepare for a school presentation on an airplane flight home from her final meet in Shanghai in late September. “Everyone has something special to share with the world. It’s their responsibility to use life to find out what it is and use it to its fullest. If I can help one person do that, I am fulfilling my purpose.”

In addition to writing, Danvers has used painting as an avenue to express herself. She is a self-taught abstract artist who has given several exhibitions of her work in Los Angeles. Her work can be viewed at www.danversbydesign.com with proceeds from sales of her work donated to ‘Be Girlz’, a mentorship program run by ‘A Place Called Home’.

“Art is such a wonderful thing. Each person sees it and feels it differently. There's no right or wrong, there's no true or false. What one person may see as a mess is an intricate beauty to another.”

Danvers is married to Darrell Smith, the nephew of World 440-yard record holder John Smith. Danvers has been training under Smith since her senior season at the University of Southern California when she won the 2000 NCAA title.

Danvers and Smith, who were married in 2004, have developed a delicate balancing between athletics and their domestic lives. “We are very and clear about the boundaries and the two different relationships. We keep them separate. If it’s too overlapping, it can create a problem.”

Danvers splits her time between Los Angeles and her native London. She consults Smith via telephone for workouts and has him analyze videos when they are apart. Danvers once took it to another extreme when she stuffed a cell phone in her tights so he could to listen to her stride patterns in a training session!

For Danvers, one of the most difficult aspects is returning to the U.S. after a lengthy stay in the United Kingdom and noticing how much her son has grown while she was away. “It’s difficult sometimes to notice that his face is slimmer and he’s become older and more mature. That’s part of a sacrifice of the family to be able to do what I want to do.”

Smith said learning to separate athletics and family has been an ongoing process, particularly separating emotions from their relationship as coach and athletes.   Nevertheless, there’s bound to occasional flare-ups. The best advice Smith has received is from Bobby Kersee, who coached his wife and Heptathlon World record holder Jackie Joyner-Kersee. “He said there’s going to be ups and downs but you better learn how to cook by yourself,” Smith said.

Danvers resumed training in November for the 2009 season, which obviously will include the Berlin World Championships. Danvers, though, hinted that some indoor competitions may also be on the slate. “The better that I do, the more that I am driven to do other things,” concluded Danvers