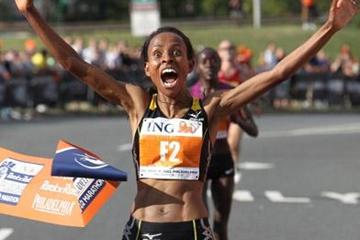 Defar clocks 1:07:44 in Half Marathon debut in Philadelphia

Philadelphia, PAEthiopia’s Meseret Defar and Kenya’s Matthew Kisorio wrote themselves into the record books with superb runs of 1:07:44 and 1:00:15 at the ING Rock ‘n’ Roll Philadelphia Half Marathon on Sunday (19).

In her half-marathon debut, Defar smashed the U.S. all-comers record, running the fastest time ever run by a woman on American soil for the distance.  Her time bested Berhane Adere’s previous of mark 1:07:52 set earlier this year at the Rock ‘n’ Roll Mardi Gras Marathon and Half Marathon.

“My feeling is good with my first half marathon,” said Defar, whose performance was the fifth fastest debut ever over the distance. “I won it. This is very big for me. I had the speed and knew that with the last 2K, I could push and win it.”

Defar, whose condition was doubtful on Saturday night, has been struggling with tendonitis in her shins and had hinted at possibly not being able to start the race.

But once the gun went off Sunday morning in front of the Philadelphia Museum of Art, any doubts as to Defar’s physical condition or the quality of her half marathon debut were quickly squashed. By the first mile, she had established herself in the lead pack, which was comprised of American Shalane Flanagan, Kwenyan Lineth Chepkurui and Ethiopian Werknesh Kidane. As the women looped around City Hall and headed back toward Kelly Drive, the pack had spread out into a line with Defar in third behind Kidane and Chepkurui.

The leaders crossed the 5-mile mark in 25:33, 14 seconds shy of World-record pace and not a surprise given the warmer-than-expected temperature of 16 C (62 F) degrees at the start of the race. The first move in the race came from Flanagan, the lone American up front who took advantage of a downhill curve past the Art Museum and cut the tangent, shooting into the lead. When asked afterward about the move, Flanagan admitted it was unplanned.

“I didn’t know the course beforehand, but my coaches are smart men and they’ve always trained me to look for those tangents,” Flanagan said. “After that, I just reminded myself to look ahead for more of them. The other women started catching on at that point.”

Flanagan’s lead was short-lived, however. The pack quickly overtook her, and Kidane moved back into first position. Flanagan dropped back at that point, gradually losing contact with the pack until she was five seconds behind the trio of Defar, Kidane and Chepkurui. Miles 6 through 8 were relatively uneventful with the leaders consistently grinding out 5:06 splits.

Still alone and her form beginning to unravel, Flanagan lagged six seconds behind heading into Mile 9, where shortly afterward the lead pack caught up with a lone male runner whom they immediately drafted behind for the next two miles. At the 11th mile (56:55) tactics began to take over. Taking advantage of her track speed, Defar edged around Kidane and moved into the lead. Chepkurui, the recent winner of the Beach to Beacon 10K countered, but couldn’t catch the Ethiopian. Kidane fell back, no longer a contender for the win. The last mile was the most exciting of the race with Defar continuing to look over her shoulder while a stone-faced Chepkurui looked straight ahead.

In the race’s final mile, which featured a sharp turn and the only substantial hill on the course, Chepkurui made a final stab at overtaking Defar, but the Ethiopian would have none of it. She put her track speed to good use and crossed the finishing tape with her finger pointed up at the sky and a large smile on her face.

Organisers and Duncan Larkin for the IAAF